Of the roughly one thousand national banks chartered during the Civil War, only eight were founded in states that seceded from the Union. One of these southern banks, First National Bank of Memphis, Tennessee, was chartered on March 25, 1864.

Memphis, a strategic port city, fell to Union forces after a dramatic gunboat battle on the Mississippi on June 6, 1862. The occupying army made U.S. dollars legal tender and outlawed the circulation of Confederate notes. Since Confederate money was all most of the citizens had, the city's mayor protested that banishing southern notes would trigger "great distress and suffering, and perhaps, even starvation." 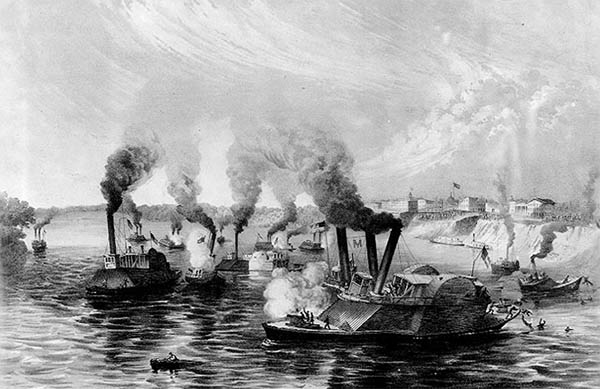 A fierce river battle saved Memphis from destruction. In less than two hours on the morning of June 6, 1862, heavily armored Union gunboats sank or captured most of a rudimentary Confederate fleet. After witnessing the crushing defeat from the banks of the Mississippi, the residents of Memphis promptly surrendered. The town escaped the fighting and fires that devastated southern cities like Richmond and Atlanta. The First National Bank of Memphis opened less than two years after the gunboat clash. (U.S. Naval Historical Center)

He didn't get much sympathy from the other side. A Union commander denounced the notes as "worthless trash" used not by the "laboring class of your city" but by rebels attacking the Union. His colleague, Major-General William Tecumseh Sherman, chastised city leaders for issuing "currency of denomination as low as 10 cents ('shinplasters')." The general suggested that parcels of cotton would be a "simpler and better" form of currency—"[i]t has a very convenient price—50 cents a pound." He declared that "[i]f it be my last act, I wish to spare the people of Memphis from the curse of any more bad money."

When the bank arrived in the spring of 1864, Memphis remained under the firm control of federal troops. As the bank's website recounts, the streets echoed with "the clatter of horse-drawn wagons, the tramp of marching feet, and the shouts of military commands." Yet Confederate marauders still lurked. During a pre-dawn raid by 1500 rebel cavalrymen on August 22, 1864, an historian writes, the attackers "undoubtedly rode right past" the bank at 9 Madison Street but did not pause to rob it.

Although a symbol of northern power, the new bank earned the respect of the southern city. By October 1865, it had $1,506,000 in assets and $73,500 in circulation. In August 1867, an OCC examiner reported that the public had confidence in the new currency: "This bank seems to be in no immediate danger of a run from holders of its notes; the teller says that it is a rare thing to see one of them, of any denomination."

The national bank and two other banks also bought "scrip" money issued by the city and handled its bond dealings. Wrote another OCC examiner disapprovingly, "the Bank is thus maintaining the credit of the city." The examiner informed the bank that he "regarded these transactions in city scrip as outside of legitimate Banking and inconsistent with the dignity and character of a National depository Bank." He added: "(A singular way indeed to maintain the credit of the city)."

But the bank helped pave the way for a "rush and roar of business" after the war. "By 1870," reports one scholar, "Memphis had many business establishments and had become the largest processor of cottonseed in the Union." Today, the bank is called First Tennessee Bank, National Association, and had $24.9 billion in assets as of the first quarter of 2013. The notes the bank issued in 1864 are still legal tender.

Confederate currency eroded as confidence in the south faltered. This $20 note was issued in February 1864 by the Confederate government in Richmond, Virginia. It promised to pay the bearer "two years after the ratification of a treaty of peace" between the warring parties. But the south unconditionally surrendered 14 months later. The southern note displayed the State Capitol building in Nashville, Tennessee—a city captured by Union forces two years before the issue of the note. In February 1865, Vice President of the Confederacy Alexander Stephens (pictured on the note) met with President Abraham Lincoln in a failed attempt at peace negotiations.

Bank notes issued by the early First National Bank of Memphis are quite rare. But a "printer's proof" from the Bureau of Engraving and Printing in the mid-1870s gives an idea of what a real Bank of Memphis note looked like. The note pledged to "pay the bearer on demand" $5 in "lawful money" (gold, silver or federal greenbacks). If the bank ran out of lawful money, noteholders could be reimbursed via the emergency sale of U.S. bonds deposited by the bank with the Treasury Department in Washington. The proof was signed by Treasury officers John Allison and Albert Wyman. At the bottom of the proof are signature lines for the cashier and president of the bank.