Bank of America: The Humble Beginnings of a Large Bank

After the devastating earthquake in April 1906, looters roamed the streets of San Francisco. Rescuing gold and silver from his small Bank of Italy, A.P. Giannini gained fame by setting up a makeshift bank on a North Beach wharf and making loans to local residents "on a handshake."

A.P. Giannini in 1904. Called "the handsomest man in North Beach," the 22-year old produce merchant married the daughter of the Beach's richest man. When Giannini's father-in-law died in 1902, his widow and 11 children did not divvy up his $1 million estate. Instead, they enlisted the talented Giannini to manage the property. It included a large block of stock in North Beach's first Italian bank. (Bank of America Historical Collection)

Amadeo Peter Giannini was born in San Jose, California in 1870. The son of Italian immigrants had an outsized personality and unlimited faith in the American dream.

Giannini began by selling fruits and vegetables from a horse-drawn wagon. But he was made for bigger things. At age 34, he launched a small bank in the Italian neighborhood of North Beach, San Francisco. At the time, big banks lent only to large businesses, handled deposits of the wealthy, and frowned on aggressive advertising.

The novice financier knocked on doors and buttonholed people on the street. He persuaded "unbanked" immigrants that gold and silver coins were safer in vaults than under mattresses. Moreover, the money would earn interest at his "Bank of Italy."

On the morning of April 18, 1906, a massive earthquake hit San Francisco. The ensuing fires burned down the large banks. Their superheated metal vaults could not be opened for weeks—lest the cash and paper records catch fire when oxygen rushed in.

As flames threatened his one-room bank, Giannini spirited $80,000 in coins out of town. He hid the precious metal under crates of oranges and steered his wagons past gangs of thugs and looters in the streets.

As other banks struggled to recover, Giannini made headlines by setting up a makeshift bank on a North Beach wharf. He extended loans to beleaguered residents "on a handshake" and helped revive the city. 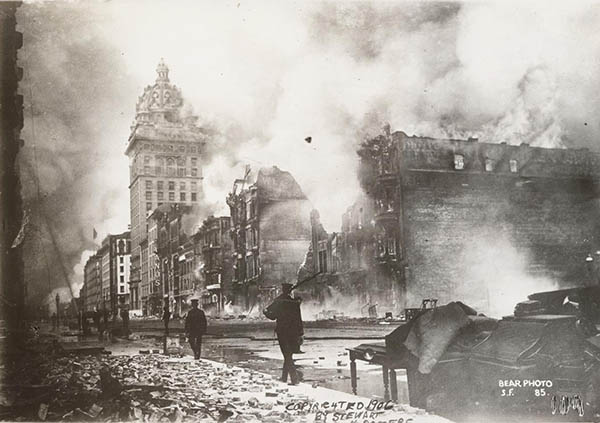 After the devastating earthquake in April 1906, looters roamed the streets of San Francisco. Rescuing gold and silver from his small Bank of Italy, A.P. Giannini gained fame by setting up a makeshift bank on a North Beach wharf and making loans to local residents "on a handshake." (California History Room, California State Library, Sacramento, California)

The innovative bank welcomed small borrowers who might otherwise have to use high-cost loan sharks. Most banks at the time regarded people with modest incomes as credit risks not worth the paperwork. But experience had taught Giannini otherwise: that working class people were no less likely to pay their debts than the wealthy.

Seeking more customers, the former produce salesman returned to his old haunts—the fertile valleys of California. He "walked in rows beside farmers engaged in plowing" to explain how bank branches make credit cheaper and more reliable. Town by town, he built the first statewide branching system in the nation.

On November 1, 1930, the Bank of Italy in San Francisco changed its name to Bank of America. The bank today has the same national bank charter number as Giannini's old bank— #13044.

When A.P. Giannini died in 1949, the former single-teller office in North Beach claimed more than 500 branches and $6 billion in assets. It was then the largest bank in the world.