From their earliest days in the United States, thrift institutions went out of their way to cultivate women as members and depositors. Even in the 19th century, when women had limited economic rights, thrift institutions recognized that women were most likely to be managers of the household budget and thus more in control of the household's spending and borrowing capabilities. In short, some viewed women as better credit risks than men.

That's why women appear on the membership rolls of thrifts as early as 1841. An 1893 survey of 4,260 thrifts found that more than 25 percent of all members were female, enjoying the same rights as male members of the association.

One thrift that exemplifies this egalitarian approach to banking is the century-old Winter Hill Bank in Somerville, Massachusetts. Since its founding in 1906 as the "Winter Hill Cooperative Bank," women have played a prominent role in the bank's business and leadership. From the beginning, it attracted the confidence of local women, even those known for their suspicion of financial institutions. When the bank opened for business, its logbooks noted with satisfaction, "even the widow Johnson emptied out her satchel and made a sizable deposit" in the new bank. 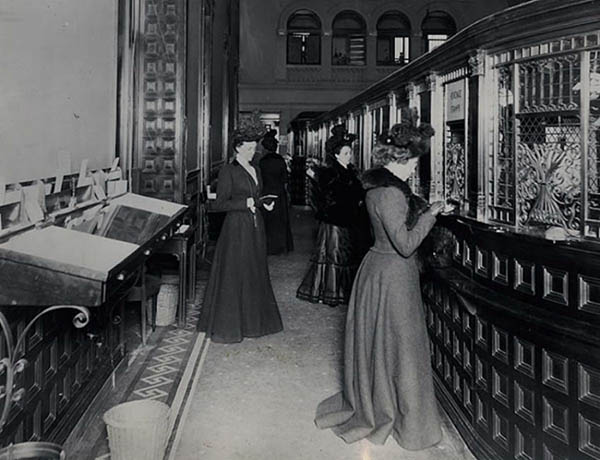 In 1900, the Fifth Avenue Bank in New York City featured a special row of tellers' windows for women.

With the confidence of careful members like the widow Johnson, the young thrift flourished and opened more branches. But its hiring and promotion practices also instilled female pride and confidence. In 1937, the bank announced that it had "made history in a big way ... Harriet Osborne was named the new Treasurer of our bank. This is very unusual in any business for any woman to hold a position of such stature and responsibility. Who knows? Maybe someday we'll have a woman as president of this bank. We can dream, can't we?"

The first female treasurer demonstrated her commitment to serving customers, even when it meant inconveniencing the staff. On one winter day, an employee reported that "we were supposed to close at the usual time of 12 noon. But today, we are especially busy, and Ms. Osborne had us keep the doors open both front and side, all afternoon, as customers kept streaming in. Apparently," this tired employee concluded, "there are many, many people who just have no respect for banker's hours."

The dream of 1937 was realized in 1990, when, after working in every department of the Winter Hill bank, Sandra McGoldrick was promoted to president and chief executive officer. She has held the position ever since.