As the first Comptroller of the Currency, Hugh McCulloch was a busy man. The National Currency Act of February 1863 called on him to create rules and structure for a new national banking system and the new bureau of the Treasury Department that would supervise it.

Every one of those first decisions became his responsibility: deciding who to place in the single deputy comptroller position Congress had authorized and who to hire to fill the necessary clerical and messenger jobs; determining what qualifications would be required for applicants for new charters; and establishing how the new national banks would operate and be supervised.

Given the vast potential importance of the national banking system, even seemingly mundane responsibilities took on special gravity. For, as McCulloch wrote Congress, it should be the aim of "those who have supervision of the system to guard it by every means in their power against ... perversions."

One such issue concerned the Comptroller's seal. Section 2 of the National Currency Act called for the creation of an OCC "seal, with suitable inscriptions." It was to be used for "every certificate, assignment, and conveyance executed by the comptroller. All copies of papers in the office of the comptroller, certified by him and authenticated by the said seal, shall in all cases be evidence equally and in like manner as the original. An impression of such seal directly on the paper shall be as valid as if made on wax or wafer." McCulloch took this responsibility very seriously. Given the great power vested in the Comptroller and his examiners, imposters and forgeries posed a serious threat. The seal, certifying the bona fides of an OCC document or official, was one of the best safeguards against the worst kind of fraud. 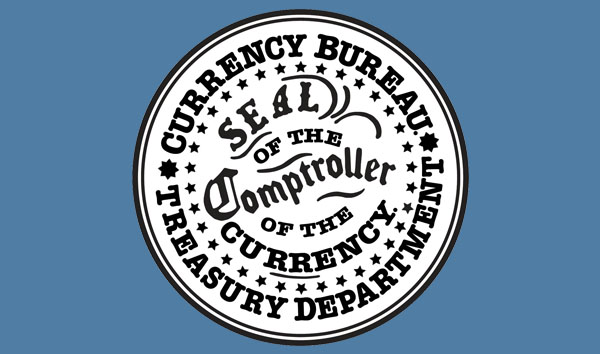 It's believed that Comptroller McCulloch had a hand in the creation of the OCC seal, which was used for many years.

No certifying seal was worth much if it could be easily duplicated, which is why the evidence suggests that McCulloch took a personal role in designing it, filling it with whirls, swirls, and curlicues. It all looks quaint and ornate to us but, like the designs of the national currency itself, the seal's intricacies were intended to foil potential counterfeiters. And McCulloch, deeply concerned about the integrity of the office he was parenting, wanted no hint of scandal that might compromise it.

The OCC's distinctive seal remained in use for many years alongside the seal of the Treasury Department, which appeared on most national bank notes of the period. And then it faded away, only to be revived to help celebrate the OCC's 100th anniversary in 1963. Today it reminds us of the time of McCulloch and Abraham Lincoln, when the OCC and the national banking system were born.