The Hardest Hit Fund (HHF) Program received up to an additional $2 billion in funds when President Obama signed into law the Consolidated Appropriations Act, 2016. This appropriations legislation includes a provision that authorizes the U.S. Department of the Treasury to obligate no more than $2 billion in additional funds from the Troubled Asset Relief Program (TARP) to 18 states and the District of Columbia (HHF states). The HHF states now have until December 31, 2020, to use all HHF funds. This is an extension from the current program end date of December 31, 2017.

The Treasury Department allocated this additional $2 billion using a two-phase process. In the first phase, $1 billion was allocated among HHF states using a formula based on each state’s population and use of previously allocated HHF funds. To qualify for the first phase, states must have drawn at least 50 percent of their up-to-date HHF funds.

In the second phase, the remaining $1 billion was allocated based on an application process that considered various criteria, including each state’s current housing market needs, the state’s plan to address those needs, and a demonstrated ability to effectively use allocated funds. The second phase was open to all 19 of the Housing Finance Agencies participating in HHF. Each state could request up to 50 percent of its previous HHF funds or $250 million (whichever was lower). Table 1 lists how the $2 billion was allocated.

Note: Alabama, Arizona, Florida, Nevada, and South Carolina did not apply for the phase 2 funding. Georgia applied but will not receive additional funding beyond phase 1, based on its performance to date and other factors. Alabama did not meet the 50 percent utilization requirement for phase 1 and therefore was ineligible for additional funds.

In choosing the two-phase funding allocation approach, the Treasury Department assessed a number of factors, including consideration of states’ current housing market needs; allocating funds in a timely manner; providing for a transparent process; and encouraging an effective use of additional funds.

States that receive additional HHF funds are subject to a “use-or-lose” requirement, which periodically redirects allocated but unused funds to states with higher utilization rates. HHF states have to meet annual utilization thresholds, beginning at the end of 2016, to retain their full funding.

The use of the additional $2 billion in HHF funds is subject to the same criteria and Treasury Department approval as other HHF funds. In general, funds must be used to support locally tailored programs designed to prevent foreclosure and to stabilize state housing markets. 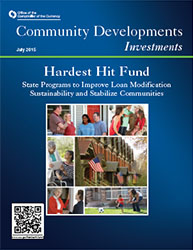