For over 40 years, the First National Bank of Gordon (FNB Gordon), based in north central Nebraska, has had the privilege to serve as the bank of choice for the Oglala Sioux Tribe. The tribe's Pine Ridge Indian Reservation is located on approximately 2.1 million acres in the southwest portion of South Dakota, an area on the Nebraska border that is more than twice as large as Rhode Island, and home to 46,855 tribe members.1

The Oglala Sioux people struggle with chronic housing issues. The tribe's official waiting list for houses has over 500 applicants, and most members have become discouraged and choose not to apply for tribal housing. The instability caused by the shortage of quality housing often results in overcrowded housing and contributes to a range of health-related problems for those living on the reservation.

During its long-standing relationship with the tribe, FNB Gordon has used a number of government programs when extending loans and making investments to enhance the economic development of the reservation. The bank has used U.S. Small Business Administration loans, Bureau of Indian Affairs guaranteed loans, and U.S. Department of Agriculture (USDA) Rural Development and Farm Service Agency guaranteed and direct loan programs.

For example, FNB Gordon has worked with USDA Rural Development to provide interim funds to construct the administration building for the Oglala Sioux tribally designated housing entity (TDHE). The banking relationship with the tribe has produced several successful deals, including financing for the construction of the commodity warehouse, the veteran's cemetery, and a new tribal nursing home. The bank has also provided banking services for several other tribal programs and businesses, such as the first motel on the reservation. These experiences provided the foundation for FNB Gordon's confidence in dealing with tribes and TDHEs.

Anatomy of a Deal

In 2013, when the Oglala Sioux Lakota Housing initially approached FNB Gordon regarding a loan from the U.S. Department of Housing and Urban Development (HUD) Loan Guarantee (Title VI) program4 for the construction of 45 three-bedroom single-family homes, the bank's officers hesitated. Despite the high concentration of tribal reservations in South Dakota, not a single Title VI loan had been made in the state. FNB Gordon is a small bank with its primary expertise in ranching loans. Given FNB Gordon's history with the Oglala Sioux and the desperate housing needs, however, its officers started conducting due diligence to investigate whether this was a project the bank should undertake.

FNB Gordon's officers spent numerous hours talking with the manager of the Title VI program and other bankers who had completed Title VI loans. The bank hired a law firm that specializes in Title VI loans. FNB Gordon also worked with a brokerage firm to gain insight into how to structure these loans for sale to participating banks.

The advice and guidance provided by the legal and brokerage firms was essential for FNB Gordon to successfully complete the application, receive approval of the loan guarantee, and close the loan. FNB Gordon sold the guaranteed portion of the loan to Native American Bank of Denver at a premium and collected a servicing fee. There was also an origination fee. As a participating bank, Native American Bank provided useful insight into the structuring and feasibility of the loan as well as ongoing monitoring of the loan. FNB Gordon retained the unguaranteed portion of the loan, secured by cash collateral.

In June of 2014, FNB Gordon's officers attended an Office of the Comptroller of the Currency (OCC) minority banks conference in Dallas, Texas, to gather further insight and discuss the Title VI program with other minority bankers and OCC staff. The officers worked with FNB Gordon's OCC portfolio manager regarding undertaking this new product and its implications for the bank.

Currently, construction is nearing completion and is on track toward substantial completion by October of 2016, as scheduled. The project has required massive additions to the infrastructure on the reservation. The bank has retained an outside construction consultant to perform monthly inspections of the sites. FNB Gordon attends monthly budget and construction meetings.

Midway through the project, the bank learned that the project's infrastructure costs were higher than projected by the tribal consultants. Part of this was due to the lack of basic infrastructure on the reservation; on many of the sites, the houses were located in the middle of former wheat fields or cattle pastures. Roads, water lines, septic systems, light poles and electricity, phone lines, and complete landscaping had to be developed.

In the future, hiring an engineering consultant during the application process will be part of FNB Gordon's underwriting procedure for Title VI loans. Verification of the proposed construction figures' validity will assist the tribal entities in budgeting properly for the projects. In areas where basic infrastructure is lacking, this will be critical and result in more accurate planning.

To ameliorate the impact of the unexpected increase in project expenses, the bank negotiated a solution with the TDHE and federal and state government agencies. FNB Gordon augmented the Title VI loan guarantee with a cost reimbursement grant and low-interest loan from USDA Rural Development, as well as a zero-payment loan from the South Dakota Housing Development Authority. This particular transaction could lead potentially to the design of a new framework for Title VI loans where the USDA funds infrastructure expenses through grants or low cost programs, while HUD finances the housing construction through its guarantee program. FNB Gordon hopes to see the synergy created between HUD and Rural Development continue in future projects.

This Title VI loan has been beneficial for both FNB Gordon and the tribe. It will provide additional housing for the tribe and create stability. The loan has also been a way for FNB Gordon to earn non-interest income and tax-free interest income. The bank is well secured. The guaranteed portion payments can be subsidized by the income stream provided by the same organization providing the guarantee in the case of a default. The Title VI program office works hard to ensure the success of the projects and has been proactive in working with the bank's officers. For FNB Gordon, working with HUD has been a positive experience. The cooperation between HUD and USDA on the loans will maximize the use of available funds and allow for more projects in the future.

FNB Gordon's officers are satisfied by the decision to take advantage of this loan product and look forward to the next opportunity in this market.

4 For information on the Title VI program, see this web page. 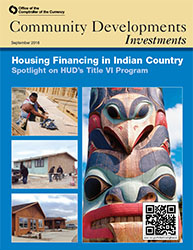