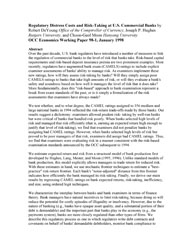 Over the past decade, U.S. bank regulators have introduced a number of measures to link the regulation of commercial banks to the level of risk that banks take. Risk-based capital requirements and risk-based deposit insurance premia are two prominent examples. Most recently, regulators have augmented bank exam (CAMELS) ratings to include explicit examiner assessments of banks' ability to manage risk. As examiners implement these new ratings, how will they assess risk-taking by banks? Will they simply assign poor CAMELS ratings to banks that take high amounts of risk, or will they evaluate a bank's safety and soundness based on how well it manages the level of risk that it does take? More fundamentally, does this "risk-based" approach to bank examination represent a break from exam standards of the past, or is it simply a formalization of the risk assessments that examiners have always made?

We test whether, and to what degree, the CAMEL ratings assigned to 356 medium and large national banks in 1994 reflected the risk-return trade-offs made by those banks. Our results suggest a dichotomy: examiners allowed prudent risk- taking by well-run banks but were critical of banks that handled risk poorly. When banks selected high levels of risk and managed that risk efficiently (that is, earning an expected return high enough to justify that level of risk-taking), we find that examiners did not penalize banks by assigning bad CAMEL ratings. However, when banks selected high levels of risk but proved to be poor managers of that risk, examiners did assign bad CAMEL ratings. Thus, we find that examiners were evaluating risk in a manner consistent with the risk-based examination standards announced by the OCC subsequent to 1994.

We estimate expected return and risk from a structural model of bank production first developed by Hughes, Lang, Mester, and Moon (1995, 1996). Unlike standard models of bank production, this model explicitly allows managers to trade return for reduced risk. With these estimates in hand, we use stochastic frontier techniques to estimate a "best-practice" risk-return frontier. Each bank's "noise-adjusted" distance from this frontier indicates how efficiently the bank managed its risk-taking. Finally, we derive our main results by regressing CAMEL ratings on bank expected returns, risk-taking, inefficiency, and size, using ordered logit techniques.

We characterize the interplay between banks and bank examiners in terms of finance theory. Bank managers have natural incentives to limit risk-taking, because doing so will reduce the potential for costly episodes of illiquidity or insolvency. However, due to the nature of banking (e.g., banks have opaque asset quality, and a substantial portion of their debt is demandable) and the important part that banks play in the economy (e.g., the payments system), banks are more closely regulated than other types of firms. We describe this regulatory process as one in which regulators write debt contracts and covenants on behalf of banks' demandable debtholders, monitor bank compliance to safety and soundness regulations, and if necessary enforce these costly covenants (e.g., higher deposit premia, more frequently and more rigorous examinations, restrictions on investment activities) when banks experience financial distress. In this framework, CAMEL ratings reflect the likelihood of both financial distress and regulatory intervention. Our empirical results suggest that the potential for costly regulatory intervention increases banks' incentives to trade return for reduced risk and to manage risk efficiently.