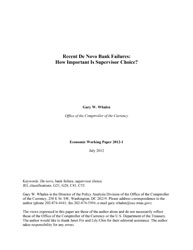 Since 2007, the number of bank failures has soared. A large percentage of the failures involved young banks formed during the mid-1990s amid the wave of new bank charters granted by federal and state banking supervisors. De novo bank supervisory choices could influence their failure risk if charter-related disadvantages exist and are large, or if the ability of banks to choose among multiple supervisors results in more lenient supervision and facilitates greater bank risk-taking.

The sample consists of 1,015 de novo banks opened from the third quarter of 1996 through the first quarter 2003. The study uses a competing risk hazard model to identify the significant determinants of failure or voluntary merger for the sample banks through the end of second quarter of 2010.

More than 7 percent of the sample banks changed their initial primary federal supervisor during the observation period. More than half of these supervisory changes also involved a charter conversion, with shifts away from supervision by the Office of the Comptroller of the Currency (OCC) accounting for most of this activity.

The empirical analysis found no evidence that banks starting with and maintaining a national charter were more likely to fail than state chartered banks. The evidence does show that some, but not all, types of subsequent supervisory changes are associated with a higher probability of de novo failure. The estimates reveal that de novos that swapped an initial national charter for a state one and supervision by either the Federal Reserve or Federal Deposit Insurance Corporation (FDIC), as well as state banks that changed their initial primary federal supervisor but not their charter were significantly more likely to fail.

The measures of supervisory choice have different effects on the probability of de novo merger. De novo banks that initially chose national charters face a significantly higher likelihood of merger, all else being equal. Supervisory change variables never have a significant influence on merger probabilities in any of the versions of the estimated model.