Braving the Financial Crisis: An Empirical Analysis of the Effect of Female Board Directors on Bank Holding Company Performance (WP 2016-1) 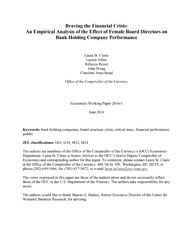