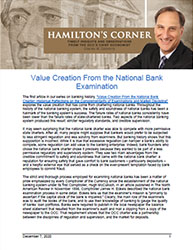 It may seem surprising that the national bank charter was able to compete with more permissive state charters. After all, many people might suppose that bankers would prefer to be subjected to less stringent regulation and less scrutiny from examiners. But banking history shows that this supposition is incorrect. While it is true that excessive regulation can hamper a bank's ability to compete, some regulation can add value to the banking enterprise. Indeed, bank founders who chose the national bank charter chose it precisely because they wanted to be part of a less permissive regulatory and supervisory system. They saw two main advantages from the credible commitment to safety and soundness that came with the national bank charter: a reputation for ensuring safety that gave comfort to bank customers—particularly depositors—and a helpful external eye that served as a check on the ever-present temptation faced by bank employees to commit fraud.

The strict and thorough process employed for examining national banks has been a matter of pride emphasized by every Comptroller of the Currency since the establishment of the national banking system under its first Comptroller, Hugh McCulloch. In an article published in The North American Review in November 1896, Comptroller James H. Eckels described the national bank examination process in some detail. Eckels tells us that the examiner's mission is "primarily to ascertain if the capital stock of the bank is impaired." Clearly, the main role of the examiners was to audit the books of the bank, and to use their knowledge of banking to gauge the quality of banks' loan portfolios. Banks were required to publish in the local newspaper the balance sheet statement that resulted from the examiner's audit and mail a clipping from a copy of the newspaper to the OCC. That requirement shows that the OCC charter was a partnership between the disciplines of regulation and supervision, and the market for deposits.

The role of the examiner and the depositor were intertwined and mutually reinforcing. The examiner's actions were designed to "prevent...loss to the depositors and the stockholders." At the same time, depositors were able to respond to the audited accounts—published in the local newspaper—knowing that they had been verified (which meant, in particular, that the loan portfolio's likely future performance had also been confirmed). The stated amounts of cash holdings, and capital and surplus, relative to the size of deposits and loans, could then be used by the depositors to exercise discipline on the bank. In other words, depositors could react to the banks' financial statements to determine the amount of deposits the bank was able to maintain (through depositors' decisions either to deposit or withdraw funds), presumably targeting the default risk of the bank when doing so (that is, withdrawing when depositors perceived that the bank's risk was too high). There is substantial evidence that depositors behaved in precisely this manner.

The partnership between regulatory and depository discipline was especially clear during the Panic of 1893. The OCC played a crucial role in assisting solvent banks that had suspended during the Panic. If a bank was suspended during the Panic, but enjoyed the confidence of its examiner, the Comptroller not only permitted it to reopen; he also publicly expressed his confidence in the bank and encouraged the depositors to maintain their deposits in the bank. Speeches by the Comptroller on behalf of a bank contributed to its successful reopening, while speeches by bankers generally had no effect.

The market discipline of depositors did not always reward national banks' safety and soundness. Generally, national banks were chosen by depositors that preferred safety and were willing to forgo the slightly higher interest on their deposits that riskier banks could afford to pay. But sometimes even erstwhile conservative national bank depositors were fooled by risky state- chartered banks that promised higher returns with no prospect of loss—a combination that no bank can ever achieve.

Over time, as the complexity of banking has increased, so have the length and complexity of the examination process for national banks. But the core principles of the Office of the Comptroller of the Currency's (OCC) examinations of national banks have been a constant since the 1860s. Examiners, like bankers, are not perfect. Banks will occasionally suffer unanticipated losses that

can, in extreme cases, result in systemic crises. Nevertheless, a credible process of examination substantially reduces the prospective size of unanticipated loss and the probability of crisis. And just as surveys of bankers revealed over a century ago that they recognized the value creation produced by examinations, surveys of today's national bank managers express their continuing appreciation for the value their banks receive from the OCC's examination process.