What Drove Five Decades of Big Changes in Banking? 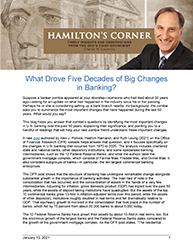 Suppose a banker zombie appeared at your doorstep—someone who had died about 50 years ago—asking for an update on what had happened in the industry since his or her passing. Perhaps he or she is considering setting up a bank branch nearby. As background, the zombie asks you to summarize the most important changes that have happened during the last 50 years. What would you say?

This blog helps you answer that zombie’s questions by identifying the most important changes in U.S. banking over the past 50 years, explaining their significance, and pointing you to a handful of readings that will help your new zombie friend understand these important changes.

A new post authored by Alex J. Pollock, Hashim Hamandi, and Ruth Leung (2021) on the Office of Financial Research (OFR) website helps answer that question, and it focuses specifically on the changes in U.S. banking that occurred from 1970 to 2020. The analysis includes chartered state and national banks, other depository institutions, and some specialized banking intermediaries, such as the 12 Federal Reserve Banks, and what the authors label the government mortgage complex, which consists of Fannie Mae, Freddie Mac, and Ginnie Mae. It also considers subgroups of banks—in particular, the ten largest commercial banking enterprises.

The OFR post shows that the structure of banking has undergone remarkable change alongside substantial growth in the importance of banking activities. The main fact of note is the consolidation that has occurred, and the concentration of assets in the hands of a very few intermediaries. Adjusting for inflation, gross domestic product (GDP) has tripled over the past 50 years, while the assets of deposit-taking institutions have quadrupled. But the assets of the top 10 commercial banks grew 13-fold in inflation-adjusted terms over this period, while the assets of other depository institutions roughly doubled in real terms and fell dramatically relative to GDP. That top-heavy growth is mirrored in the consolidation that took place in the number of banks, which fell by 75 percent from about 20,000 banks to about 5,000 today.

A second noteworthy fact is that an enormous asset concentration that has occurred is largely in the hands of intermediaries controlled by the government. Fifty years ago, the Federal Reserve Banks plus the government mortgage complex comprised about 12 percent of the total assets of what the OFR study defines as the Banking Credit System; now they are 40 percent.

The OFR post identifies an overarching theme of increasing dependence on the government that connects the facts they document. The post reads, “Over the last 50 years, the Banking Credit System grew… much more dependent on both the government mortgage complex and the government’s central bank, greatly increasing its dependence on explicit and implicit government guarantees. This history exemplifies the maxim of Charles Calomiris and Stephen Haber that every banking system is a deal between the bankers and the politicians.”

The OFR authors kindly refer here to our 2014 book, Fragile By Design , in which we argue that all important trends in banking reflect what we call a “game of bank bargains,” where powerful political coalitions compete to control government decisions that drive those trends. The expansion of central bank control obviously was a decision and could not have occurred without the active support of the government. The expansion of the government mortgage complex also reflected a government choice to subsidize politically popular risk in mortgage credit. As several authors have documented, this trend is not specific to the United States. Throughout the world, the total fraction of mortgage credit relative to other forms of credit has grown dramatically since 1970.1 The consolidation of U.S. banking reflected the political choice to abandon the uniquely fragmented “unit banking” system that had characterized the United States for the prior one and a half centuries.

The OFR post’s reference to increasing dependence on government and explicit and implicit government guarantees deserves further comment. Over the past 50 years, four different kinds of government protection of banking have increased in the United States (and in the rest of the world): deposit insurance, too-big-to-fail protection, mortgage credit guarantees, and central bank assistance to distressed intermediaries. The growth of all of these forms of government guarantees has played an important role in explaining the concentration of credit in a few government-dependent hands.

The Federal Reserve’s decision to bail out Continental Illinois National Bank and Trust Company in 1984 set an important new precedent for government rescue of a failing bank justified by concerns about systemic consequences of permitting a disorderly failure. At the time, Continental Illinois was a relatively big bank, but it was small in comparison to the behemoths that were assisted in 2008 and 2009 (such as Citigroup, Bank of America, American International Group, Fannie Mae, and Freddie Mac). There can be little doubt that various unprecedented government protections over the past several decades, consisting of Fed actions to assist distressed banks, special Troubled Asset Relief Program (TARP) support for large banks,2 and the codification of too-big-to-fail policies under Title II of the Dodd–Frank Wall Street Reform and Consumer Prevention Act (which created an explicit mechanism through which systemically important banks would be prevented from failing) all added to the competitive advantages of large banks. Of course, it is also true that large banks face special regulations, which to some degree offset those competitive advantages.

The Federal Housing Enterprises Regulatory Reform Act of 1992 and many other government policies specifically targeted the subsidization of mortgage credit risk as a top government priority.3  Then, after the 2007–2009 crisis, the Dodd–Frank Act of 2010 singled out Fannie Mae and Freddie Mac (which were placed in conservatorship during the crisis and remain so today) to be exempted from the qualified mortgage and qualified residential mortgage minimum credit quality standards that are applied to other mortgage intermediaries. Those and other policies, including explicit generous government guarantees provided to the Federal Housing Administration and Ginnie Mae, account in large part for the continuing growth of the government mortgage complex.

There has also been an expansion in the generosity of deposit insurance protection, both within the United States and around the world. That expanded protection not only has helped depository institutions compete with other intermediaries, which helps to explain their growth relative to GDP in recent decades, it also turns out to have been an important contributor to subsidizing housing credit, within the United States and elsewhere.

The growth in housing credit within the credit system has been remarkable since 1970. Jordà, Schularick, and Taylor (2015a) show that, for a group of 17 currently developed economies, real estate lending’s share of total lending increased from under 40 percent in 1970 to nearly 60 percent by 2010. In the United States, prior to 1913, national banks were prohibited from making any real estate loans. Real estate lending, including by deposit-financed institutions, was promoted beginning in the1930s with numerous government programs, including the federal thrift charter, the federal insurance of thrift deposits, and the creation of the Federal Home Loan Banks, the FHA, and Fannie Mae.

Much of this is well known. What is less understood is how the expansion in the generosity of deposit insurance has fueled real estate lending by deposit-financed intermediaries. A typical U.S. bank today has about three-quarters of its lending devoted to real estate loans of some kind. As observed by Pollock (2019), “We still use the term ‘commercial banks,’ but a more accurate title for their current business would be ‘real estate banks.’” This is a far cry from the prohibition on real estate lending for national banks prior to 1913. How does increased deposit insurance generosity affect banks’ mortgage lending?

We find that, for a large sample of developed and developing economies, an expansion of deposit insurance generosity by the government increases banking system risk in three ways: it expands banks’ proportion of assets in loans (rather than cash assets), it increases banks’ leverage (debts/assets), and it increases the proportion of mortgage loans as a fraction of total loans.

We interpret this last finding as reflecting two possible influences, both of which we believe are important, and which we may be mutually reinforcing. First, deposit insurance protection may be seen as part of a political bargain between banks and the government; more protection may be given to banks in exchange for their willingness to undertake more politically popular mortgage lending. Second, because deposit insurance reduces a bank’s liquidity risk by removing the incentive of depositors to withdraw deposits from banks when their failure risk increases, more generous deposit insurance may make banks more willing to make illiquid loans, including mortgages.

In summary, there is much evidence behind the OFR post’s assertion that “the banking credit system grew … much more dependent on both the government mortgage complex and the government’s central bank, greatly increasing its dependence on explicit and implicit government guarantees.” A combination of aggressive central bank actions; increasing generosity of deposit insurance; expansion of government subsidies for mortgage credit risk via Fannie Mae, Freddie Mac, and the Federal Housing Administration; government bail-out policies such as TARP; and Dodd–Frank’s Title II codification of too-big-to-fail protection goes a long way toward explaining the increasing importance of government in financial intermediation and the increasing concentration of the credit system.

What’s missing from this historical discussion is the new guy on the block—fintech shadow banks—which have shown an ability over the past several years to capture more market shares in payments and lending from traditional intermediaries. As I discussed at length in 2020, these new shadow banks are demonstrating the success of new business models. Those business models use beneficial new technologies for reducing the operating costs of payment services and credit. The new business models also tend not to bundle these two types of services to the extent that traditional intermediaries have, which may be a consequence of changes in information technology.

From the perspective of the OFR post and the other articles cited here, the most interesting aspect of the new breed of fintech banks is that most of them (so far) are not dependent on explicit or implicit government guarantees to obtain their funding.5 They provide a glimmer of hope that the future of banking may be driven more by efficiency in providing services to customers than by the ability to make beneficial political deals. Perhaps 50 years from now we will be telling zombies in need of a summary of the prior 50 years of banking changes about a resurgence that occurred in the efficiency of banks and their ability to grow on the basis of that efficiency rather than the subsidies they received from the government.

Calomiris, Charles W., and Sophia Chen (2020). “The Spread of Deposit Insurance and the Global Rise in Bank Asset Risk Since the 1970s,” Journal of Financial Intermediation , forthcoming, available at

Calomiris, Charles W., and Urooj Khan (2015). “An Assessment of TARP Assistance to

5 The exceptions are fintech mortgage companies like Quicken Loans, which bundle credit and payment operations, and are symbiotic with the government, as their business models depend on the government guarantees of Fannie Mae, Freddie Mac, and the FHA.