A Penny Saved: Thrift Bears Name Of A Founding Father

The Franklin Loan and Building Association of Salem, New Jersey, was incorporated in the same month the Civil War began—April 1861. But the new bank drew its name from an earlier era, from a Founding Father with a legendary career as a statesman, scientist and financial visionary.

The thrift institution has always been proud of its namesake: "Benjamin Franklin led a life enormously filled with accomplishments, and we hope that if he were to regard us today, it would be with deep satisfaction." The fact that the bank has grown and flourished over 152 years of war, depression, peace and prosperity suggests that its hopes are not unfounded. It now serves its rural southern New Jersey community under the supervision of the Comptroller of the Currency. 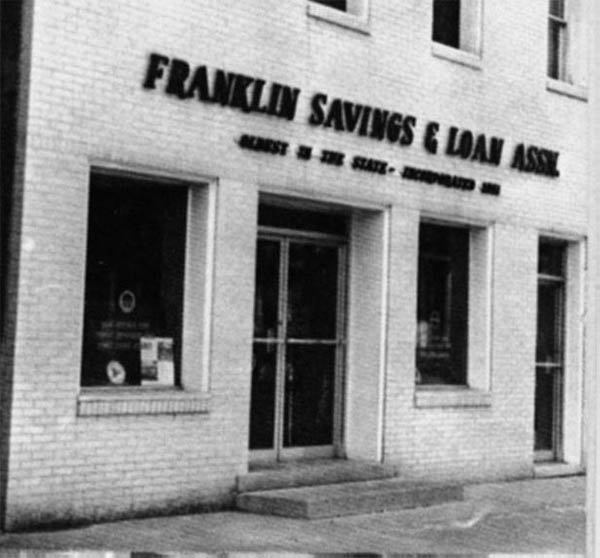 Franklin Bank was a 'savings & loan' when its first full-time business office opened in Salem, New Jersey in August 1946. Prior to that, a bank history reports, 'the routine business of the association was conducted on a part-time basis in the homes and places of business of the officers.' (Franklin Bank)

Franklin's role in shaping the financial values and practices of his times is well worth remembering. He designed and printed colonial currency. He was an innovator in the battle against counterfeiting—placing an intricate picture of a sage leaf on the back of bills. He urged his countrymen to live lives of thrift, writing in "Poor Richard's Almanack," a "penny saved is twopence dear," in other words, that "a penny saved is a penny earned." (Interestingly, Franklin was quite a free spender in his private life.) He was an early advocate of a "national" paper currency and became "arguably the preeminent authority on paper money in America." Later, of course, $100 bills displaying his face would become a commonplace.

When Franklin Bank opened its doors in 1861—shortly before the National Currency Act of 1863—counterfeiting of state bank notes was rife. Ben Franklin, for whom the bank is named, was a pioneer in the war against fake notes. As a printer of New Jersey currency in 1737, he used intricate sage leaf designs to thwart illegal copiers. Today the $100 bill bears Franklin's portrait and contains anti-counterfeiting features such as a three-dimensional blue strip and color-changing copper "bell in the inkwell." (newmoney.gov (Federal Reserve Board))

Every school child in America learns (or should learn) about Franklin's kite experiment with electricity. In fact, an image of Franklin and his kite appeared on the ten dollar note of national currency from the first charter period. In that sense, Franklin can be said to have made possible all the technology from which banks have benefitted: the telegraph, light bulb, telephone, radio and computers.

In the 20th century, the thrift to which Franklin gave his name adapted to increasing regulatory and capital requirements by opening new branches and offering more services. In 1988, in light of regulatory changes that granted thrifts much the same powers as banks, the then-named Franklin Savings and Loan Association changed its name to Franklin Savings Bank, S.L.A—and built full-service banking facilities. Today known simply as Franklin Bank, it had assets of $251 million in the first quarter of 2013.

That's a lot of pennies. The man who helped revolutionize the 18th century would marvel at the dramatic changes in the world of banking since then.