In his 1897 novel "Captains Courageous," Rudyard Kipling wrote of the "men o'Marblehead" and the perilous "Grand Bank ... a waste of wallowing sea, cloaked with dank fog, vexed with gales, harried with drifting ice."

The National Grand Bank of Marblehead was named in honor of the brave "men o' Marblehead" and their dangerous fishing voyages. The Massachusetts bank received its federal charter on the last day of 1864. It converted from the Grand Bank, a 33-year old state bank serving mariners and merchants "who made their living by the sea."

The bank's title is actually a play on words, "Grand Bank" referring to the rich fishing grounds off the coast of Newfoundland. Twice a year, men nicknamed "bankers" boarded double-mast schooners in the Marblehead harbor and sailed 1000 miles north to the Grand Bank (or Banks). They lowered dories with ropes, rowed out and with baited lines hauled in protein-rich codfish.

For its first century, The National Grand Bank operated on the former estate of a Marblehead sea captain. A local historian writes that the bank occupied a "Georgian Revival building and, being built of granite it gives the feeling of substance and security—most appropriate for that type of institution."

Six months after the chartering, the bank was examined by the Comptroller of the Currency. A visiting examiner found assets of $239,421.46, circulation of $32,434, and a wealth of experience and integrity. The current president and cashier had served the previous bank in those capacities for about a quarter century each. The bank directors were "all substantial reliable men, for many years connected with the bank." Concluded the federal inspector, "the bank is in every way in good hands, they only wish to know the right, and do it."

The bank needed strength and substance, because life in the 19th century town could be fragile. On a fateful day in 1846, 65 townsmen and boys were lost to a violent storm off the Grand Bank. The legendary fishing industry waned, and attention to turned toward a thriving shoe industry, work that fishermen (and families) had long done when not on a boat.

In 1873, a nationwide financial panic threw many local shoe workers into joblessness. Four years later, the town was ravaged by fire. "The entire business portion of the town had disappeared in a single night," recounts a history of Marblehead. But in the two years "since the great conflagration ... nearly every building destroyed has been replaced by a new and commodious structure." 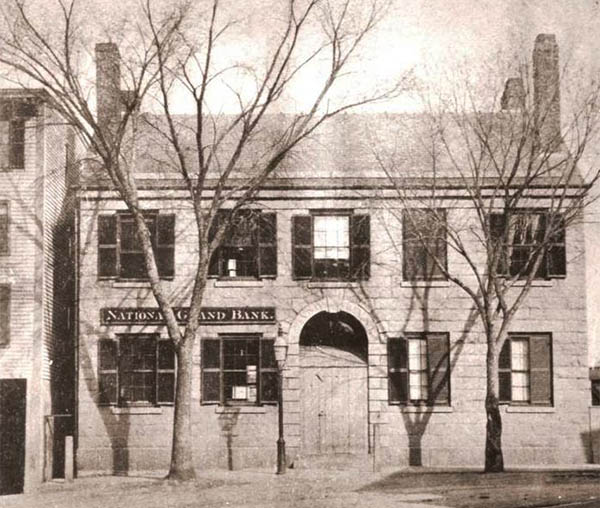 In 1873, National Grand Bank (above) survived both a fire and a nationwide bank panic.

In the fire, the building next door to the bank was burned to the ground. As this second picture shows, the building was rebuilt further away in the following year — while the bank added security bars.

The briefly resurgent shoe business would fade as well, leaving for larger towns and factories. Meanwhile, Marblehead became a popular seaside resort graced by majestic homes of centuries past. It is often called one of the prettiest towns in New England. Cod and lobster boats share the harbor with armadas of pleasure craft and world-class racing yachts.

Today the National Grand Bank of Marblehead finances both traditional and up-and-coming industries—including commercial and recreational fishermen, home purchases and entrepreneurs in the biotech industry.