A bloody attack on a remote Midwestern bank in 1876 was the undoing of the notorious James gang.

More than a decade after the Civil War ended, Jesse James and other former Confederate guerrillas from Missouri ventured 400 miles north to the bustling mill town of Northfield, Minnesota. Skilled at combat, the veteran bank-and-train robbers probably thought the unsuspecting village was easy pickings.

But the eight heavily-armed men met disaster on the afternoon of September 7. Inside the bank, the acting cashier refused to open the vault and was shot to death. Meanwhile, gang members standing watch on the street aroused the suspicions of townspeople and a fierce gun battle erupted. A sharpshooting hardware store owner killed a bandit on a horse. The battered gang galloped out of town and posses were soon hot on its trail.

In those days without deposit insurance, the store owner may have had his life savings at risk in the bank. The heroic clerk, Joseph Lee Heywood, surely knew that a robbery could make a bank fail and cripple a town. Ten years earlier a bank in Liberty, Missouri had failed after a $58,000 robbery attributed to the James gang. After the Northfield raid, two local college presidents said their institutions would have closed down had the bank lost all its money. 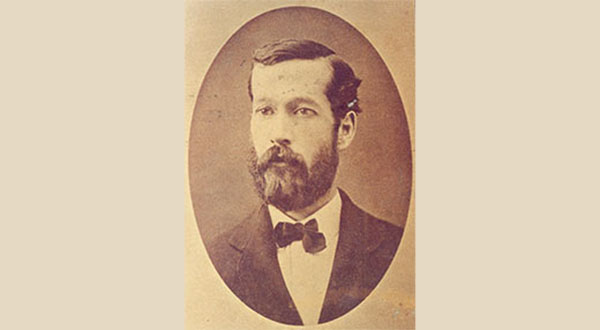 Thirty-nine year old Joseph Lee Heywood was acting cashier of the bank when he was murdered. He thwarted the robbers by insisting he could not open the safe's time lock—a relatively new innovation in bank security. The safe was actually unlocked when the gang arrived at the bank, but the bandits took Heywood (and his assistants) at his word and did not try to open it. (Northfield Historical Society)

In the end, as $15,000 in cash lay untouched in the vault, the robbers got away with only $26.70. An alert community saved a community bank. Posting an announcement in a Boston newspaper, the Minnesota banking community told the world what happened. "The bank cashier ... with a bowie-knife at his throat and a pistol at his temple, returned a decisive "No" to the demand ... that he should open the bank vault to be plundered."

The grateful Northfield bank gave a then-substantial $5,000 to the widow and daughter of its loyal employee. More than $12,000 poured into the "Heywood Fund" from more than 450 banks across the country and Canada. Contributors included 16 Missouri banks, presumably happy to see the destruction of their home-state desperadoes.

The James gang never recovered from the debacle that killed three members and imprisoned three others. Five years later, James himself was killed in Missouri by a gang recruit seeking the state reward on his head.

The First National Bank of Northfield, now 140 years old, is part of the national bank system created during the Civil War. The new banks financed the Union war effort and launched a national currency. By protecting the hard-earned currency of a town, one of their Midwestern outposts closed a final chapter of that conflict. 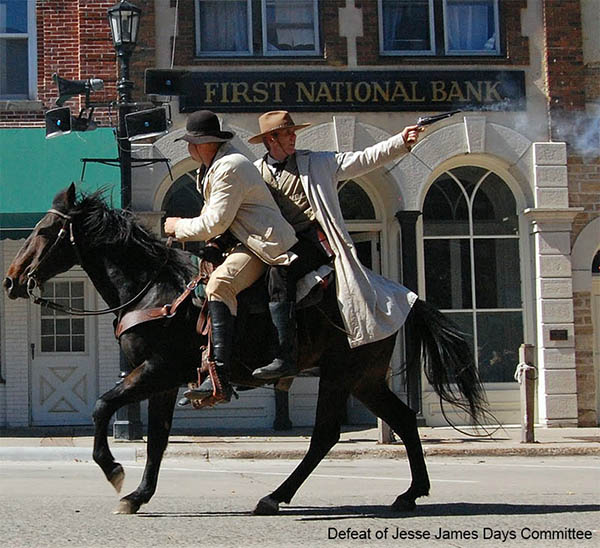 The "defeat of Jesse James" is re-enacted every September on the streets of Northfield. In this scene, after his horse was killed and his elbow shattered by a bullet, pistol-packing robber Bob Younger is rescued by his brother Cole. The gang wore long linen "dusters" to conceal heavy weaponry. Once the fighting began, the robbers were conspicuous targets for enraged townspeople, including rock throwers. Released from a Minnesota prison 25 years later, Cole Younger toured in a "wild west show" with another gunman in the raid—Frank James, older brother of Jesse. (Defeat of Jesse James Days Committee)