During the Great Depression, a national bank in central Iowa survived twin threats: A bad economy and the man declared "Public Enemy Number One" by the U.S. Attorney General. Today the bank is known as First Newton National Bank. 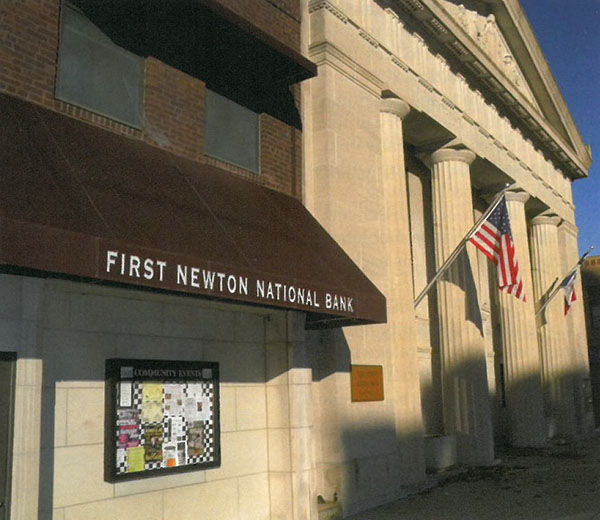 The First Newton bank today—the same building where the robbery was supposed to take place in 1934. (Iowa Banking Magazine)

1931 was a time of sinking public confidence in the banking system. The Newton bank entered the year with $1,778,356 in deposits. But by October alarming quantities of money had been withdrawn. In the face of this run, the board of directors voted to close the bank's doors while it tried to acquire additional capital. The bank succeeded in raising $100,000 in only a week and was reopened for business by early 1932.

Two years later, the infamous John Dillinger gang struck a northern Iowa bank on the wild afternoon of March 13, 1934. The robbers took $50,000 in a bloody shoot-out replete with hostage-taking and clouds of tear gas. 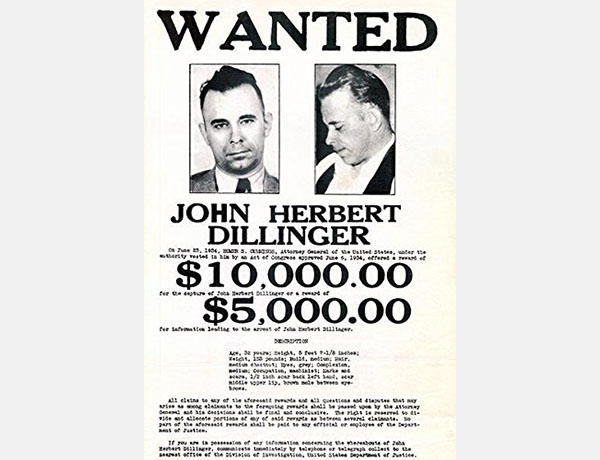 John Dillinger, son of an Indianapolis grocer, first robbed a grocery store. Paroled from prison in May of 1933, he found bank robbery more lucrative. Over the next year, Dillinger and his gang plundered more than a dozen Midwestern banks for today's equivalent of around $5 million. An elaborate plan to rob the national bank in Newton, Iowa in April of 1934 fell through. Although "Public Enemy Number One" underwent plastic surgery on his face and tried to burn off his fingerprints with acid, he was tracked down and killed by lawmen in Chicago in July 1934. (FBI.gov)

At a gang hideout in nearby Minnesota, police found a getaway map of the next target—the tiny town of Newton. Bank robbers often clipped elaborate maps to dashboards of their high-powered cars. As the Newton Daily News later reported, the gangsters likely planned to park "just outside the bank on First street North."

The getaway map instructed the driver to maintain certain speeds every tenth of a mile and to slow down on certain bad roads. After passing a manufacturing company, airport and cemetery, the fleeing bandits were to switch to another car waiting at a "corner nine miles north of Newton."

On Wednesday, April 4—the expected day of attack—federal officers, police detectives and the local sheriff's force laid in wait. But the robbers didn't show up. We now know that Dillinger remained in Minnesota recovering from a bullet wound in his leg. Four months later, he was killed by Justice Department (now FBI) agents while leaving a movie theater in Chicago.

Before departing Newton, federal agents left behind gas masks and a "Tommy gun" with the bank president. A Dillinger biographer wrote that many law officers adopted the powerful weapon after discovering that a "dozen cops armed with six-shot handguns were no match for a single John Dillinger brandishing a .45 caliber Thompson machine gun."

This Thompson submachine gun, or "Tommy gun", was given to the Newton bank by federal agents after the robbers failed to show up. The terrifying weapon, designed for trench combat during World War I, was used by both sides of the law in the 1930s. Tommy guns could fire six hundred rounds per minute. (Iowa Banking Magazine)

Ironically, the left calf wound that kept Dillinger in Minnesota came from a ricochet from his own Tommy gun during a firefight with police. By thwarting his plans, the battle may have saved lives in the town of Newton.

Iowa Banking Magazine reported that at "some point after [the president died] ... the gun was discovered in a closet at the bank. There was concern about having a fully functional, fully automatic weapon in the bank, so it was made to be inoperable." A little lead poured down the barrel did the trick.

Other than that, says the bank, the Tommy gun is "in fantastic condition."