Preston Delano served as Comptroller for 14 years, 107 days—the longest serving Comptroller in history. Yet he left little positive imprint on his office or the historical record. This is an anomaly in search of an explanation. 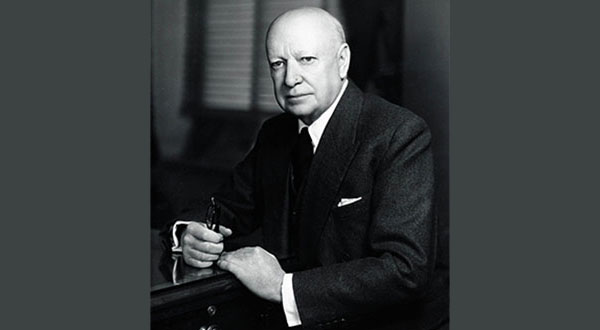 At 14 years, 107 days, Comptroller Preston Delano's service was the longest of all Comptrollers.

Delano is variously described as courtly, low-keyed, and self-effacing. A 1945 Finance magazine profile devoted many more words to describing his three deputies and his secretary than Delano himself. Even the cover photograph speaks to his modesty: shot at long perspective, his head is dwarfed behind his enormous office desk.

This was typical of him. Although frequently photographed—he was, after all, a public person, and, as one reporter colorfully put it, "the Big Boss of Banking"—he invariably looked stiff and tight-lipped, as though he wanted nothing more than to be somewhere else.

It was not as if he was lacking in self-confidence. Son of one of Boston's oldest and most distinguished families, Delano grew up on the family estate at Fairhaven. He was a distant relative of the president who first appointed him. It was so distant, in fact, that Delano claimed he didn't know what the relationship to FDR actually was. He attended Harvard, but transferred to Stanford, where he graduated in 1909. For a time after college, he was a reporter for the San Francisco Chronicle, not usually a job for introverts. Soon after, however, he settled into more conventional work, becoming an investment banker specializing in mortgage lending. In 1935, Delano became a governor of the Federal Home Loan Bank system, which had been created three years earlier.

Delano, therefore, was a stark contrast from his predecessor, the rollicking North Dakotan J.F.T. O'Connor, whose tenure as Comptroller was marked by bitter rivalries with the other financial regulators, raw political ambition, and, of course, the mighty challenge of resurrecting the banking system during the Great Depression.

Fortunately for Delano, the job of resurrection was largely complete when he was appointed to succeed O'Connor, who left near the end of his term to pursue higher office in California, his adopted home state. Under O'Connor, some 2,000 insolvent national banks had been liquidated under OCC supervision and more than 1,000 national banks reorganized under old or new charters or absorbed by existing institutions. With the banking legislation of 1933 and 1935, which severely limited bank powers and gave regulators near-total discretion to rule on new charter applications, the system was placed on a conservative footing that helped it to withstand the severe recession of 1937–1938 and do its part to finance the economic expansion of the war and postwar years.

Solid and non-controversial, Delano was a logical choice to preside over the national banking as it entered a new era in which safety was paramount and restoring public confidence after the trauma of the Depression was viewed as the foremost challenge.

Under Delano's steady hand, national banks achieved unprecedented stability. In his Annual Report for 1938, Delano noted with some pride that no new national banks had been chartered during the entire year. On average, the office granted 17 new charters a year during his tenure; in 1947 and 1950, more were denied than approved. This left a profitable national banking system that was smaller in numbers than it was when he became Comptroller (5245 vs. 4916), despite the rapid growth in U.S. population (from 129.8 million to 160.2 million), much of it moving into new east coast suburbs and communities carved out of the desert southwest. The banking expansion that took place was largely in the form of branches of existing institutions, which increased substantially (from 1509 to 2366) during his tenure.

Altogether, Delano asserted in his 1951 Annual Report, "there are very few people in this country who do not have reasonably convenient access to banking facilities." Depending on how one defined "reasonably convenient," he would get a lot of argument on that point, and not just from would-be bankers whose ambitions were thwarted by the OCC's restrictive chartering policies. Throughout the 1950s, as Delano gave way to his successor, Ray Gidney, there was rising sentiment that the U.S. banking system was taking on cartel-like properties, stifling competition and innovation and increasing costs. One economist estimated that restrictive chartering in the 1940s and ‘50s boosted returns for insiders by as much as 2 percent. With this built-in advantage and regulators looking over their shoulders, bankers had few incentives to work harder.

Delano admitted that trying to get the structural balance right was one of the "most complex problems" he faced in office. The numbers, and what little subsequent scholarship has appeared on this easily overlooked era in American banking, suggest he erred too much on the downside.

Wrestling with the legacy of the Great Recession, today's bank regulators can perhaps better appreciate the pressures on Delano and his peers. His generation believed that the banking crisis of the Great Depression—their crisis—stemmed from overbanking and over-competition. Restoring stability and public confidence, they believed, required strict, even draconian, limitations on the numbers of banks and what they could do, and that is what they provided. Preston Delano may remain elusive as a person, but he was emphatically a man who gave the times what he thought they required.