The town of Grundy lies deep in the Appalachian mountains of southwestern Virginia. As the sun settles behind the pine and oak-covered peaks, shadows lengthen in the narrow valley. Nightfall comes early for the thousand residents below.

Occasionally, heavy rains send masses of water hurtling toward a sharp bend in the Levisa Fork River. But the flood on April 4, 1977 was like nothing in memory. Three people died, with $15 million in damages. A local newspaper blared "Grundy: A City Destroyed." The stream swelled to 25 feet high, rushed onto a parking lot and slammed into the Grundy National Bank about 250 feet away. 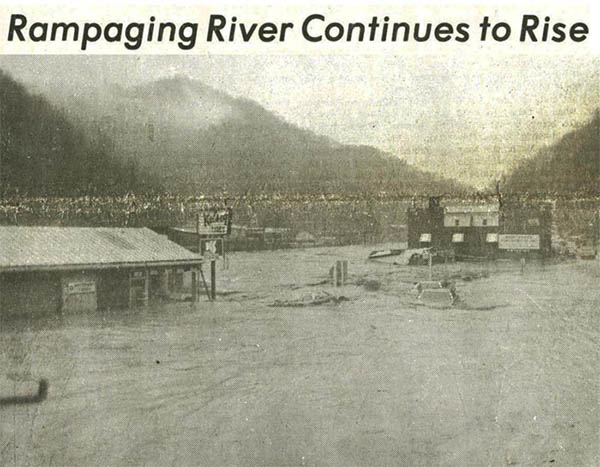 The 1977 flood overwhelmed the tiny town of Grundy. (Virginia Mountaineer)

Muddy water smashed through a glass door into the bank lobby. For years afterward, a brick column in the lobby was darkened by a "high water mark"—six or seven feet tall. While couches, desks and carpet were ruined, vital customer items were saved. Cash in the vault was soiled but every dollar was accounted for. Hundreds of promissory notes signed by customers were soaked but still readable and valid.

The retreating water left behind 6 to 10 inches of mud on the bank floor. Employees trudged for miles along a closed-off Highway 83 with a wheelbarrow and shovels. They wanted to get a head start on cleaning up the foul-smelling mire before a professional crew came in.

With the return of electricity in a few days, the bank was open for business again. In what one might call legal money laundering, the Federal Reserve Bank of Richmond swapped new cash for the grimy bills.

Under armed guard, safe deposit boxes were removed to trailers and their precious contents dried out. The bank made home equity loans to hundreds of residents to buy new furnishings and rebuild walls or entire homes.

Brighter Skies: The bank as seen today. During the storm, the bottom floor was filled with six or seven feet of muddy water. (Grundy National Bank)

The town is now "flood-proofing" itself with the cooperation of government and private sector. The U.S. Army Corps of Engineers blew off the peak of a nearby mountain to create flat land. The bank is helping finance the relocation of many restaurants and shops from downtown to mountaintop.

Things are "looking up" in Grundy.