In 1963, exactly 100 years after the formation of the OCC, a young gentleman, fresh out of law school, was hired by the OCC to be a bank examiner in the Chicago Duty Station. What made that particular hiring a special event was the fact that it was the first time the OCC had hired an African-American as a bank examiner. His name was Roland W. Burris and while he was only with the OCC for a brief period, he has gone on to make history elsewhere in the U.S. 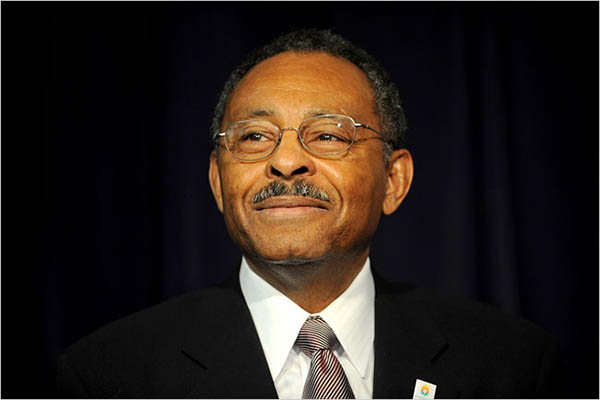 In 1978, Burris became the first African-American elected to statewide office within the state of Illinois when he became State Comptroller. Burris served in that position for three terms and was elected Illinois Attorney General in 1990. Asked how he chose his particular career path, Burris responded, "I set two goals during the summer between my sophomore and junior years in high school. One goal was to become a lawyer. The other was to be an elected official."

After graduating high school, Burris went on to Southern Illinois University and earned a degree in political science. While there, he took up German as a second language, mastering it so well that he was one of only two students chosen to participate in an exchange program with Germany's University of Hamburg.

After studying in Germany for some time, Burris returned to the USA to complete his master's degree at Howard University. Afterward, he continued to study at Howard, obtaining a law degree as he had aspired to do.

Thereafter, Burris returned to Chicago, where—even with a master's and a law degree—it was difficult for a young African-American to get a job. The job search went on longer than he expected. Enter the OCC.

So, what was it like for Burris to be a bank examiner who also happened to be a black American during the civil rights era of the early 1960s? Mr. Burris relates that after receiving his training, his first assignment was at the Livestock National Bank in Chicago. Since it was his first job, Mr. Burris wanted to arrive early. But he couldn't get in the door!

"My boss wasn't there yet. So, of course, I had to knock on the door. The guard was barring the door. He wasn't going to let me in. I stuck my credentials through the door and he kept shaking his head. Someone got an officer of the bank and the officer read 'Comptroller of the Currency' on the badge. So they opened the door and said 'O.K., you can sit right here.' Until my boss showed up, they wouldn't let me move."

Although Burris experienced similar situations at other banks during his year with the OCC, that wasn't what led him to leave the OCC in 1964 to accept a position at

Continental Illinois National Bank. Rather, Burris' decision was prompted by one of the same issues that generally cause examiners to reconsider their future with the agency: travel.

In 1973, after nearly a decade of service to the bank, Burris left to join then-Illinois Governor Dan Walker's Cabinet as Director, Department of General Services. He ran for State Comptroller in 1978, easily winning that position, and realizing his second, and long-held, key aspiration. After three terms Burris ran successfully for State Attorney General.

Later, in 1990, Burris made his first of three bids for the Democratic nomination for the Illinois governorship. And though he did not succeed in that effort, there is no question that Burris has led a most successful life—one that honors the African-American community, as well as the OCC.