30th Comptroller of the Currency 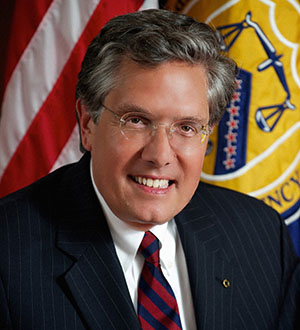 The Comptroller of the Currency is the administrator of the federal banking system and chief officer of the Office of the Comptroller of the Currency (OCC). The OCC supervises more than 1,400 national banks and federal savings associations and about 50 federal branches and agencies of foreign banks in the United States. These institutions comprise nearly two-thirds of the assets of the commercial banking system. The Comptroller also is a director of the Federal Deposit Insurance Corporation (FDIC).

Mr. Curry served as Chairman of the Federal Financial Institutions Examination Council (FFIEC) for a two-year term from April 2013 until April 2015. Comptroller Curry was the 21st FFIEC Chairman, marking the fifth time the OCC has led the Council. As Comptroller, he most recently served as Chairman of the NeighborWorks America Board of Directors from March 2014 through June 2016.

Before becoming Comptroller in 2012, Mr. Curry served as a director of the Federal Deposit Insurance Corporation (FDIC) beginning in January 2004 and as the Chairman of the NeighborWorks® America Board of Directors.

Prior to joining the FDIC's Board of Directors, Mr. Curry served five Massachusetts Governors as the Commonwealth's Commissioner of Banks from 1990 to 1991 and from 1995 to 2003. He served as Acting Commissioner from February 1994 to June 1995. He previously served as First Deputy Commissioner and Assistant General Counsel within the Massachusetts Division of Banks. He entered state government in 1982 as an attorney with the Massachusetts' Secretary of State's Office.

Mr. Curry served as the Chairman of the Conference of State Bank Supervisors from 2000 to 2001, and served two terms on the State Liaison Committee of the FFIEC, including a term as Committee chairman.