WASHINGTON — The quality of large syndicated bank loans stabilized this year, according to the Shared National Credit (SNC)1 review released today by federal bank regulators. However, regulators noted that adversely rated loans remain at an elevated level, and will require continued vigilance.

The results — reported by the Board of Governors of the Federal Reserve System, the Office of the Comptroller of the Currency, the Federal Deposit Insurance Corporation, and the Office of Thrift Supervision — are based on analyses that were prepared in the second quarter and reflect business and economic conditions at that time.

Total loan commitments2 classified as either substandard, doubtful or loss fell by $4.9 billion or 3 percent over the previous year, compared with a net increase of $39.8 billion or 34 percent the year before. Commitments rated special mention decreased by $23.8 billion or 30 percent, in contrast to 2002 when they grew by $3.5 billion or 4.6 percent. None of these figures include the effects of hedging or other techniques that individual organizations might have employed to mitigate risk. 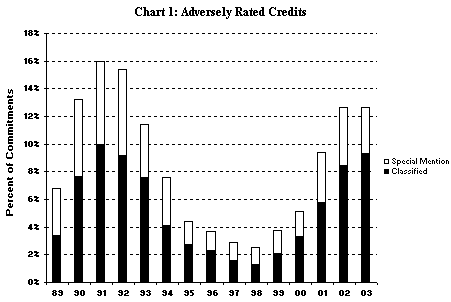 In aggregate, the SNC Program covered 8,232 credits totaling $1.6 trillion in loan commitments to 5,111 borrowers in 2003. Total commitments were down by 20 percent from the 2001 peak of $2.0 trillion, driven by lower customer demand, tighter underwriting standards, attractive capital market financing alternatives, and repositioning by banks to exit non-strategic business lines and less profitable customer relationships.

The quality of the SNC portfolio was mixed as modest-to-strong improvements in the majority of industry sectors were nearly offset by deterioration in the energy sector (oil, gas, pipelines, and utilities — see Appendix B). In total, improving industry segments more than offset deteriorating ones by $4.9 billion. The strongest improvement occurred in manufacturing, with an $18.2 billion decline in classified commitments largely driven by loan repayments from a handful of substandard borrowers. Classifications in the telecommunication and cable segment fell $2.4 billion, but remained at significantly elevated levels. Other segments such as financial services and insurance showed modest declines, with classification rates that were below those for the entire SNC program. In contrast, the energy sector showed rapid deterioration with a $21.1 billion rise in classifieds largely attributable to leveraged firms involved in energy trading. In addition, the well-known problems facing U.S. passenger airlines drove a $1.1 billion net increase in classifieds for the lodging and transportation sector. Credits identified for special mention fell by $23.8 billion with strong declines experienced in nearly every industry. These declines were driven by a migration of a portion of prior year special mention credits to classified categories, as well as a decline in newly identified potential weaknesses.

Despite a decline of 44 percent in loans identified in the loss classification, this year's level of losses, $10.7 billion, was the second highest on record. Of total losses, $5.0 billion, or 47 percent, were directly attributable to the weakened telecommunication and energy sectors, the Argentina default, and asbestos-related litigation (see Table 2 below). The remaining losses were spread widely across a variety of industries. In contrast, during 2002 more than 60 percent of losses were attributable to the telecommunications and energy sectors. Table 2 also highlights that nearly half of 2003 SNC classified commitments were related to the telecommunications and energy sectors, compared to roughly one-third in 2002.

Table 2 Selected Industry and Country Losses for 2003 (in $ billions)

During 2003, the share of SNC commitments held by nonbanks5 continued to grow, edging up 1 percentage point to 11 percent, while the share held by foreign banking organizations (FBOs) fell to 44 percent and that held by U.S. banks6 held steady at 45 percent (see Table 3 next page). U.S. banks experienced a 20 percent decline in classified assets during 2003, compared to a rise of 5.5 percent at FBOs and a 6.0 percent rise at nonbanks. These disparate trends further differentiated the quality of holdings among entity types, with classifieds amounting to just 5.8 percent of total commitments for U.S. banks, compared to 9.0 percent at FBOs and 24.4 percent at nonbanks. Similarly, total nonaccrual outstandings fell for U.S. banks and rose for FBOs. However, despite a rise in classified commitments, nonaccrual outstandings for nonbanks fell.

The significantly higher classification rate for nonbank holdings is consistent with market observations that nonbanks continue to be active participants in the sub-investment grade portion of the syndicated loan market and are active purchasers of distressed loans in the secondary markets at discounts to par value; all dollar amounts in this release are par amounts.

Banking organizations have continued to remain vigilant in identifying problem credits and have generally reflected the appropriate risk rating in their internal credit ratings. Although credit problems have stabilized, banking organizations must continue to carefully monitor the condition of their borrowers in the current environment to ensure that they promptly identify and address any emerging weaknesses and adjust loan loss allowance levels appropriately7.

1 The Shared National Credit (SNC) Program was established in 1977 by the Board of Governors of the Federal Reserve System, the Federal Deposit Insurance Corporation, and the Office of the Comptroller of the Currency, and in 2001 the Office of Thrift Supervision became an assisting agency. The annual program, which seeks to provide an efficient and consistent review and classification of large syndicated loans, generally covers loans or loan commitments of at least $20 million that are shared by three or more financial institutions, with a few exceptions.

2 Loan commitments included both drawn and undrawn portions of a loan or loan facility.

3 Excerpt from SR Letter 79-556 defining regulatory classifications: Classification ratings are defined as "Substandard," "Doubtful," and "Loss." A substandard asset is inadequately protected by the current sound worth and paying capacity of the obligor or of the collateral pledged, if any. Assets so classified must have a well-defined weakness or weaknesses that jeopardize the liquidation of the debt. They are characterized by the distinct possibility that the bank will sustain some loss if the deficiencies are not corrected. An asset classified as Doubtful has all the weakness inherent in one classified Substandard with the added characteristic that the weaknesses make the collection or liquidation in full, on the basis of currently existing facts, conditions, and values, highly questionable and improbable. Assets classified Loss are considered uncollectible and of such little value that their continuance as bankable assets is not warranted. This classification does not mean that the asset has absolutely no recovery or salvage value, but rather it is not practical or desirable to defer writing off this basically worthless asset even though partial recovery may be effected in the future.

Excerpt from June 10, 1993 Interagency Statement on the Supervisory Definition of Special Mention

Assets:
A Special Mention asset has potential weaknesses that deserve management's close attention. If left uncorrected, these potential weaknesses may result in deterioration of the repayment prospects for the asset or in the institution's credit position at some future date. Special Mention assets are not adversely classified and do not expose an institution to sufficient risk to warrant adverse classification.

4 Nonaccrual loans are defined for regulatory reporting purposes as "loans and lease financing receivables that are required to be reported on a nonaccrual basis because (a) they are maintained on a cash basis due to a deterioration in the financial position of the borrower, (b) payment in full of interest or principal is not expected, or (c) principal or interest has been in default for 90 days or longer, unless the obligation is both well secured and in the process of collection." In Table 1, nonaccrual classifieds are those funded or outstanding portions of loans classified as substandard and doubtful which are not accruing interest. For 2003, this consisted of $23.6 billion in loans rated substandard and $27.4 billion rated doubtful.

6 To better reflect ultimate ownership, U.S. banks are defined to exclude U.S. chartered subsidiaries of foreign banking organizations for the years 2001 through 2003. These U.S. subsidiaries of FBOs are included in the FBO totals.

7 For further guidance, institutions should refer to the July 12, 1999 Joint Interagency Letter to Financial Institutions on the allowance for loan losses, as well as the July 2, 2001 Interagency Policy Statement on Allowance for Loan and Lease Losses (ALLL) Methodologies and Documentation for Banks and Savings Institutions.