Board of Governors of the Federal Reserve System, Federal Deposit Insurance Corporation, Office of the Comptroller of the Currency, Office of Thrift Supervision

WASHINGTON — The volume of Shared National Credits (SNC) rose by 21% in 2006, the fastest pace since 1998, reflecting, in part, significant merger and acquisition lending, according to the SNC2 review results released today by federal bank and thrift regulators.

The 2007 review noted an increase in the volume of criticized credits. However, the volume of criticized credits as a share of total SNC commitments remains low by historical comparison and is indicative of satisfactory credit quality. The review also included an assessment of underwriting standards and practices. Examiners found weakened underwriting standards in the syndicated lending market, particularly in non-investment grade or leveraged credit facilities.

The results of the review--reported by the Board of Governors of the Federal Reserve System, the Office of the Comptroller of the Currency, the Federal Deposit Insurance Corporation, and the Office of Thrift Supervision--are based on analyses prepared in the second quarter of 2007.

Classified commitments held by United States (U.S.) domiciled banking organizations increased to $19.2 billion from $13.1 billion in 2006, while the classified ratio was only 2.0 percent, a slight increase of 40 basis points. This percentage is substantially below the 3.1 classified percentage of the entire SNC portfolio as U.S. banks continue to hold a significantly lower volume of the classified loans.

These discussions of criticized credits and their ratios do not include the effects of hedging or other techniques that organizations often employ to mitigate risk. 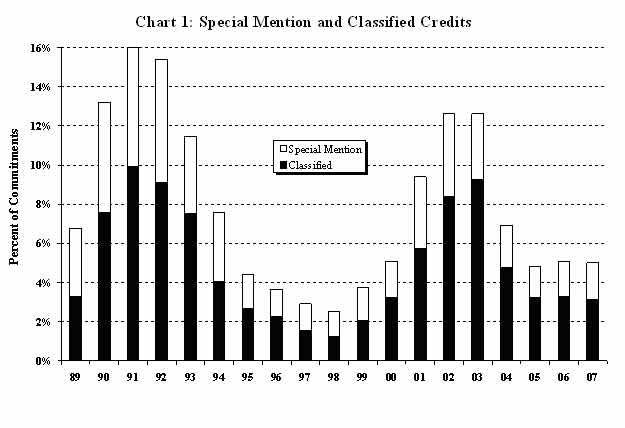 In aggregate, the 2007 SNC portfolio included 7,686 credits totaling $2.3 trillion in credit commitments to 5,264 obligors. SNC commitments increased by $401 billion, or 21.4 percent over 2006 results. This is the largest percentage increase since 1998. The portfolio's growth reflects, in part, substantial merger and acquisition financing provided during 2006 and into early 2007. Total outstandings, or drawn amounts, of $835 billion were up 33.4 percent from the prior year, the largest increase in both dollar and percentage terms in the past 18 years. In addition, outstandings as a percent of total commitments increased from 33 percent in 2006 to 37 percent in 2007.

Criticized commitments rose to $114 billion, but still remain less than half of their peak dollar level in 2002. Criticized credits represent a modest 5.0 percent of total commitments, about the same rate experienced over the past three SNC reviews.

SNCs classified substandard rose $11.5 billion, or 20 percent from the 2006 review. The severity of the classified portfolio lessened this year as doubtful credits decreased $1.3 billion, or 54 percent (see Table 1), and credits classified as loss fell $400 million, a 34 percent reduction from the prior year. Nonaccrual4 classified credits fell 78 percent to $3.9 billion, and only represent 0.2 percent of the SNC portfolio. 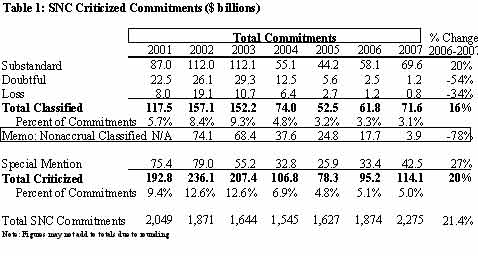 Credits in the Manufacturing sector continue to comprise the largest industry component of the SNC portfolio at $570 billion, or 25 percent of total SNC commitments, followed by Financial Services and Insurance at 20 percent, and Oil, Gas, Pipelines, and Utilities at 12 percent.

While Construction and Real Estate and Lodging and Transportation experienced the highest growth rates at 50 percent and 38 percent, respectively, the Manufacturing sector had the largest volume growth at $126 billion, or 31 percent of total growth in the SNC portfolio. Some of the larger subsector growth rates were in computer equipment, healthcare, and construction.

For more than a decade, lenders not regulated by the federal banking agencies or affiliated with banks, such as brokerage firms, mutual funds, insurance companies, and hedge funds, have taken on larger positions in the syndicated market. These nonbank institutions have increased their share to 16 percent of total commitments from 10 percent five years ago and 2 percent in 1996.

The quality of holdings also varied among entity types with classified commitments amounting to 2.0 percent of total commitments at U.S. banks compared with 1.9 percent at FBOs and 9.6 percent at nonbanks. Nonbank institutions continue to hold the largest portion of the SNC classified portfolio at 48 percent compared to 27 percent by U.S. banks and 25 percent by FBOs. U.S. bank holdings of classified credits did, however, increase from 21 percent to 27 percent over the past year, and classified credits held by banks insured by the FDIC increased from 17 percent to 22 percent.

Rapid portfolio growth, weakening of underwriting standards, and the increase in criticized credits over the past year are indicative of increased credit risk. As such, banking organizations should ensure that underwriting standards are not compromised by competitive pressures. Consistent with safe and sound banking practice, agent banks should underwrite funding commitments in a manner reasonably consistent with internal underwriting standards. Examiners noted a significant volume of loans with liberal repayment terms such as little to no amortization prior to maturity, reliance on refinancing as a primary source of repayment, and lack of meaningful financial loan covenants such as leverage and fixed charge coverage ratios. Examiners also noted the backlog of leveraged loan commitments that cannot currently be distributed without incurring potential market losses and may need to be retained in portfolio. In addition, banking organizations should ensure underwriting processes include a comprehensive repayment capacity analysis that demonstrates a borrower's ability to repay debt over a reasonable period of time. 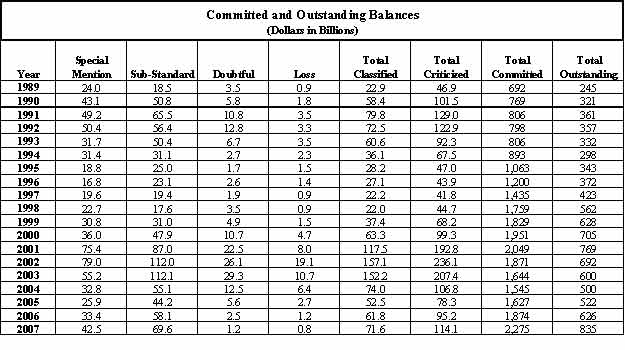 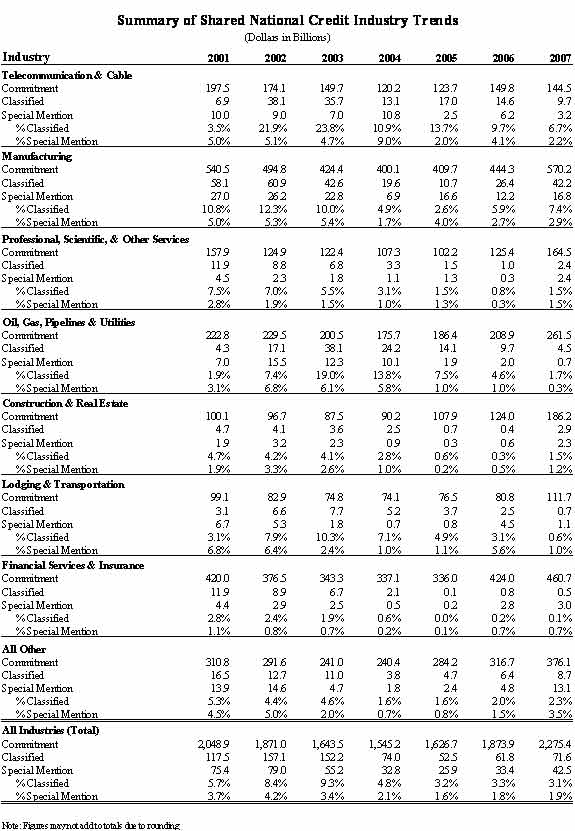 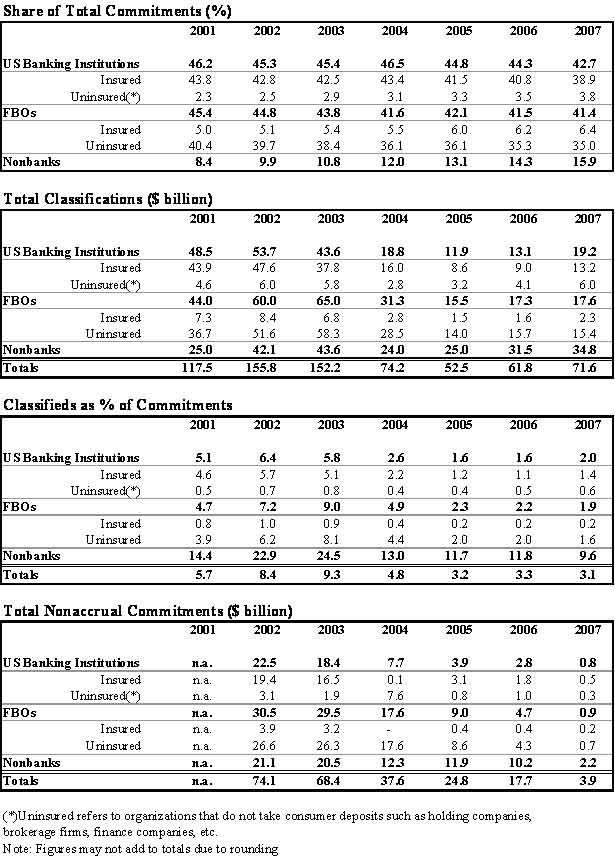 1Credits include syndicated loans and loan commitments, letters of credit, commercial leases, as well as other forms of credit. Credit commitments include both drawn and undrawn portions of credit facilities. This release reports only the par amounts of commitments; these may differ from the amounts at which loans are carried by investors.

2The Shared National Credit (SNC) Program was established in 1977 by the Board of Governors of the Federal Reserve System, the Federal Deposit Insurance Corporation, and the Office of the Comptroller of the Currency. In 2001, the Office of Thrift Supervision became an assisting agency. With a few exceptions, the annual program, which seeks to provide an efficient and consistent review and classification of large syndicated loans, generally covers loans or loan commitments of at least $20 million that are shared by three or more regulated financial institutions.

3Criticized credits are the total of credits classified substandard, doubtful, and loss – and credits rated special mention. Classified credits are only those rated substandard, doubtful, and loss. Under the agencies' Uniform Loan Classification Standards, classified credits have well-defined weaknesses, including default in some cases. Special mention credits exhibit potential weaknesses, which may result in further deterioration if left uncorrected.

Excerpt from federal banking agencies' examination manuals defining regulatory classifications: A Substandard asset is inadequately protected by the current sound worth and paying capacity of the obligor or of the collateral pledged, if any. Assets so classified must have a well-defined weakness or weaknesses that jeopardize the liquidation of the debt. They are characterized by the distinct possibility that the institution will sustain some loss if the deficiencies are not corrected. An asset classified Doubtful has all the weaknesses inherent in one classified Substandard, with the added characteristic that the weaknesses make collection or liquidation in full, on the basis of currently existing facts, conditions, and values, highly questionable and improbable. Assets classified Loss are considered uncollectible and of such little value that their continuance as bankable assets is not warranted. This classification does not mean that the asset has absolutely no recovery or salvage value but rather that it is not practical or desirable to defer writing off this basically worthless asset even though partial recovery may be affected in the future. Amounts classified Loss should be promptly charged off.

Excerpt from the June 10, 1993 Interagency Statement on the Supervisory Definition of Special Mention Assets: A Special Mention asset has potential weaknesses that deserve management's close attention. If left uncorrected, these potential weaknesses may result in deterioration of the repayment prospects for the asset or in the institution's credit position at some future date. Special Mention assets are not adversely classified and do not expose an institution to sufficient risk to warrant adverse classification.

4Nonaccrual loans are defined for regulatory reporting purposes as "loans and lease financing receivables that are required to be reported on a nonaccrual basis because (a) they are maintained on a cash basis due to a deterioration in the financial position of the borrower, (b) payment in full of interest or principal is not expected, or (c) principal or interest has been in default for 90 days or longer, unless the obligation is both well secured and in the process of collection."