TD Bank is joining forces with ReBUILD Metro (initially known as TRF Development Partners, or TRF DP) to stabilize and revitalize the East Baltimore community of Oliver by financing the rehabilitation of historic row houses. The two organizations are using a combination of tools that include federal historic tax credits. This initiative is known as the East Baltimore Historic Redevelopment Project.

Baltimore's Oliver neighborhood is adjacent to the Johns Hopkins University Medical Campus, on the east side of the city. In 2003, Oliver was known for suffocating crime and blight, famously portrayed in the HBO series The Wire. Despite these obstacles, Baltimoreans United In Leadership Development (BUILD), a faith-based community coalition of 40 Baltimore churches representing 20,000 residents, believed an opportunity to resuscitate the local market existed.

The coalition sought the expertise of the Reinvestment Fund, a nationally recognized community development financial institution, to implement the vision and renew East Baltimore.

The Reinvestment Fund and BUILD formed a partnership, TRF DP, to implement the East Baltimore plan, working with the city of Baltimore, Johns Hopkins University, and several of the city's leading foundations. The Reinvestment Fund's policy solutions team provided the data and analysis, and BUILD mobilized community residents to survey every parcel in Oliver, including more than 1,100 abandoned buildings and vacant lots. The community planning effort was designed to connect the area to the northwest of Johns Hopkins Medical Center with other major city assets (Penn Station, Station North Arts and Entertainment District, the University of Baltimore, and Maryland Institute College of Art).

TRF DP's investment and capitalization leveraged the in-depth, data-based analysis of the neighborhoods and the parcel-level surveys to formulate a community-based plan to acquire and develop land and buildings for affordable housing without displacing existing residents. The plan targeted sites identified as key "build from strength areas" because they were contiguous to stronger clusters of buildings and community facilities. The overarching goal of the plan was to provide families with access to affordable housing within a mixed-income population area and ensure that the existing low- and moderate-income residents are able to remain in the community and benefit from these improvements. The majority of the buildings identified in the redevelopment plan were owned by the city of Baltimore and conveyed to TRF DP at a nominal cost; the remaining row houses were purchased from private owners.

The target area is a series of contiguous historic districts, encompassing approximately 42 square blocks, and is covered by dense row house developments. Each vacant row house undergoes a total rehabilitation, which includes new Energy Star windows and new appliances and HVAC systems. Both the interior and exterior design are consistent with federal historic standards.

The East Baltimore Historic Redevelopment Project financing structure involves the initial development of rental properties using federal historic tax credit equity, and the slow conversion of rental units to homeownership as the market develops. The model uses an innovative master financing structure that allows for scale redevelopment of individual vacant historic buildings. This master financing structure allows for buildings to be redeveloped individually or in small groups based on a predetermined pro rata capital allocation. The structure allows TRF DP to use a pipeline approach, in which four to six buildings are grouped and then rehabilitated one at a time. The pipeline redevelopment approach lowers the project's holding costs, spreads the legal and professional costs across a greater number of units, and allows local contractors to more easily participate. Because the contracted value of four to six buildings is at a manageable cost, smaller firms can participate. The approach increases the number of local jobs created, maximizing the benefit for the neighborhood.

In 2016, a third phase began for the construction of 48 additional units. As of September 2017, 12 units are completed, with the remaining units expected to be completed by the summer of 2018. As a result of these and other redevelopment efforts, the percentage of vacant and abandoned properties in the Oliver investment area, which includes over 1,750 properties, has been cut in half, from 36 percent to 18 percent. TRF DP's investments have attracted other developers to the area. In 2006, the area averaged less than one building permit per month. In 2016, the area averaged five building permits per month. Although the neighborhood is seeing an increase in redevelopment and property values, this project's focus on affordable rental housing seeks to minimize the displacement of existing community residents.

The favorable financing structure allows for rents that are affordable to families and individuals earning between 50 percent and 80 percent of area median income. The East Baltimore Historic Redevelopment Project has demonstrated that it is possible to provide a range of affordable housing options for a mixed-income population.

With the first two phases complete, entire blocks have been transformed. Subsequent phases will connect with these newly revitalized nodes as renovation efforts expand to additional blocks on the periphery of the original target area. This process is drawing private investors into the community, amplifying the redevelopment impact of TRF DP's work.

As row houses approach construction completion and obtain certificates of occupancy, the leasing process gets underway. Tenants come from neighborhoods throughout the city, but as many as 30 percent come from within the Oliver neighborhood.

TRF DP approached TD Bank with a proposal to incorporate historic tax credit equity into the financing of the East Baltimore Historic Redevelopment Project in 2012. The bank recognized the high level of community involvement and research that had gone into developing the revitalization plan and agreed to an initial investment of $2.2 million. The bank subsequently agreed to provide additional equity investments of $1.7 million in 2014 and $2.7 million in 2016, as well as construction loan and term financing for these later phases. Figure 1 shows the structure of the historic tax credit transaction. Each phase of the project is financed through a unique partnership. All transactions are structured using a single-tier "master tenant" structure, under which the bank purchases a 99 percent ownership interest in a special purpose entity created to own the fee-simple interest in the properties associated with that partnership. This entity leases the properties to a master tenant entity, which is also created for the specific partnership. The master tenant leases individual units to the residential tenants. Through its ownership interest, the bank receives historic tax credits as well as a "cash on cash" return on its investment.

The initial historic tax credit equity contribution was made at the time the designated buildings were acquired by the partnership. Construction-period financing included a conventional loan made by TD Bank as well as a loan from the state of Maryland and the TRF DP Affordable Housing Fund (TRF DP-AHF), a loan fund created by TRF DP for Baltimore to further its affordable housing development activities.

Upon construction completion and receipt of certificates of occupancy, the remaining historic tax credit equity contribution was made; Community Development Block Grant and HOME Investment Partnerships funds were disbursed; a portion of the TD Bank construction loan converted to a five- year term loan; and the TRF DP-AHF capital was recycled into the next acquisition/construction project.

Tables 1 and 2 illustrate the project costs.

Because this effort focused on expanding rental housing, the East Baltimore project offers a valuable model for using historic tax credits as an effective tool in the revitalization of neighborhoods without displacing lower-income residents. In all, 74 individual row houses have been restored to their original character and 78 households have safe, clean, affordable homes. Several key factors have been essential to the success of this project and are critical considerations if this model is to be replicated in other communities. They include the following:

TD Bank has had a decade-long lending relationship with the Reinvestment Fund and has invested in two new markets tax credit (NMTC) transactions for which the Reinvestment Fund provided the NMTC allocation. The bank's positive experience with the Reinvestment Fund lent credibility to the fund's initial proposal seeking TD Bank's investment in the East Baltimore Redevelopment Project. The bank was able to draw on TRF DP's reputation for high-quality research and analysis to evaluate the feasibility of the concept. TRF DP also assembled a capable team of professionals, with the knowledge and skills to structure a complicated financial transaction.

The TD Bank equity and lending teams were able to underwrite the transaction based on a well-crafted project budget and cash flow projections. The bank's due diligence included site visits to the Oliver neighborhood and the offices of TRF DP and the Reinvestment Fund, as well as an analysis of the financial capacity of the project sponsor, TRF DP, and its property management capabilities.

In addition to its assessment of the financial and structural integrity of the proposed project, TD Bank considered the community development benefits of this investment. The bank regulatory agencies have determined that banks may receive favorable CRA consideration for investing in historic tax credits if the investment meets the definition of community development in the CRA regulations.

The East Baltimore Historic Redevelopment Project will enable TD Bank to receive CRA consideration for this investment based on the dramatic improvement to the housing stock as well as affordability restrictions that ensure the project will be accessible to low- and moderate- income residents. The community development benefits are safeguarded by the commitment of state and city resources, which incorporate specific affordability covenants.

To date, TRF DP has completed $70 million of a $150 million investment plan for East Baltimore, including the redevelopment of more than 250 TRF DP homes, with an additional 110 units under construction. TRF DP's strategy has attracted several other private developers to the area, which is consistent with the initial goal of stabilizing the real estate market. In this way, TRF DP is viewed as a market catalyst, not exclusively as a housing developer. 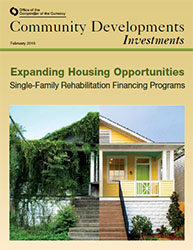