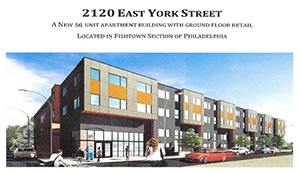 PNC Bank, N.A. (PNC) works to make communities stronger and more prosperous as part of our culture as a community-focused "Main Street" bank. Those of us working with lower-income communities understand that truly transformative development opportunities don't come around very often but, project by project, these opportunities accumulate to maintain and strengthen disadvantaged communities across the country.

Part of PNC's aim to do right by its customers and communities involves us exploring new programs and avenues, particularly in communities that need them most. PNC recognizes that new financing options have the potential to be game changers for low-income communities. For example, the low-income housing tax credit (LIHTC) was first introduced in 1986. Today, LIHTCs have become a pillar of the affordable housing industry. The new markets tax credit, introduced in 2000, has since demonstrated many successes in stimulating economic development in lower-income areas.

At the end of 2017, a new tool was added to the community development toolbox with the introduction of opportunity zones and qualified opportunity funds (QOF).

Congress created opportunity zones with the Tax Cuts and Jobs Act (TCJA) of 2017 to help reduce economic inequality by stimulating the economy in low-income and economically disadvantaged communities through the investment of realized capital gains. Opportunity zones are primarily in low-income census tracts designated by each state's governor that can benefit from private investment spurred by these tax incentives.

Investors, like PNC, reinvest realized capital gains into QOFs, which in turn are used to help finance projects located in the opportunity zones. The investments into QOFs enable investors to temporarily delay and potentially eliminate a percentage of the taxes on realized capital gains, with the amount varying based on the length of the investment. Investment terms in QOFs vary from five to 10 years, and the longer the investment in the opportunity zone, the greater the tax incentive.

In 2018, after the TCJA became law, PNC explored how it might take advantage of this new tax benefit opportunity. One of the bank's initial considerations was the program's timeline imposed for an investment in a QOF after the investor realizes a capital gain. (The incentive requires that capital gains must be reinvested in a QOF within 180 days of realization.) PNC scoured its existing real estate development pipeline to see which properties were in opportunity zones and how we could resolve timing delays caused by appraisal gaps or insufficient debt service coverage to meet the opportunity zone program timelines.

Another PNC consideration was determining the purpose of the QOF and subsequent project investments. From a programmatic perspective, opportunity zones generally are intended to benefit distressed communities. Current regulations do not, however, provide specific requirements on projects a QOF might finance. The lack of specific requirements means it might be possible for a developer to seek financing from a QOF for a project that is inconsistent with a local community's wishes or a municipal plan for that site.

To address this issue, PNC imposed its own criteria when selecting which QOFs to invest in and used the Community Reinvestment Act (CRA) as the guide. PNC decided to invest in QOFs that are consistent with the PNC Community Development Banking team's mission to support community development, as defined in the CRA.

Another PNC consideration was how to structure its investments in QOFs. PNC decided to form QOFs as closed funds, which means the bank is the single investor, and the funds do not permit outside investors. At the project level, the funds would allow third-party investors to invest as silent investors along with the bank. In many projects, this extra support is necessary to help make the funds' projects financially feasible.

PNC's QOFs are experiencing high demand from other investors interested in investing in opportunity zones. Due to the timeline constraints associated with maximizing the opportunity zone tax benefits and the long timeline for getting projects ready for financing, PNC's opportunity funds invest in projects that are already fairly advanced in their planning and development. These projects are located within PNC's retail footprint, have total development costs ranging from $5 million to $20 million, and have a shorter horizon for getting to the closing table. By offering lower-cost, long-term financing, PNC qualified opportunity funds can turn a project with a financing gap into a project that is a viable deal. 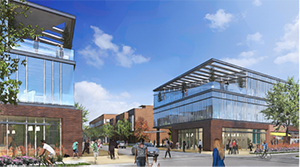 The following are two examples of PNC's opportunity zone projects that are making a difference in local communities in our footprint.

Ogden Commons in Chicago: After more than a decade, Chicago's North Lawndale community is getting a new, major mixed-use development, one that will bring much-needed jobs, retail space, state-of-the-art health services, and eventually hundreds of new residential units to a historically African American and underserved West Side neighborhood. Ogden Commons will transform 10 acres of vacant land on a site once occupied by the now-demolished Ogden Courts, one of the city's more troubled public housing developments. When complete in 2026, the entire project will provide 120,000 square feet of commercial space and over 350 mixed-income housing units. Ogden Commons is a partnership between PNC, the Habitat Company, the city of Chicago, the Philipsborn family, and the Chicago Housing Authority.

Phase 1 is under way. Leveraging a PNC opportunity zone investment and loan, this three-story building with 50,000 square feet of commercial and retail space will be the new home of Sinai Health System's federally qualified health center affiliate, which will occupy 66 percent of the space. It is noteworthy that more than 70 percent of Sinai's patients are low-income clients who rely on Medicaid. Ethnic minorities comprise more than 80 percent of the neighborhood's population. The project will create more than 110 permanent jobs and create a home for two African American-owned restaurants (Steak 'n Shake and Ja' Grill).

The project's total development cost of $21.5 million will be funded by a 76 percent equity investment from PNC through the PNC Opportunity Zone Fund, 11 percent equity from the Habitat Company, 9 percent from the Chicago Housing Authority, and 4 percent from third-party equity investors. PNC also provided a $3 million construction/term loan and bridged a $2.5 million grant from the city, with the Chicago Housing Authority contributing the land.

2120 East York Street in Philadelphia: This project is located in the East Kensington neighborhood in the River Wards section of Philadelphia. Like many industrial sections of older cities, this neighborhood has had a few different lives. In its heyday, the area was bustling with nautical industries such as ship builders and commercial fishing. It transitioned to iron and steel manufacturing, then textiles. Neighborhood decline began in the 1950s when the large industrial buildings gradually emptied, jobs went elsewhere, and residents struggled to find new work. This decline continued for many years. Today, East Kensington is experiencing significant redevelopment and a resurgence in population and vibrancy.

Philadelphia's Master Plan calls for more transit-oriented housing in the East Kensington neighborhood. The PNC Opportunity Zone Fund will finance a development consisting of 56 apartments for workers with moderate or middle incomes. Consistent with the city's plan, the developers will build a mixed-use project with commercial space on the ground level and workforce housing on the upper levels. In this project, workforce housing units will be available to persons earning 80 to 100 percent of the area median income and who are paying no more than 30 percent of their income for housing. The project is located within the city's multimodal transportation system for providing easy and cost-effective transportation for residents to and from Center City.

The project's total development cost of $12.8 million will be funded through a 62 percent investment from the PNC Opportunity Zone Fund; a 20 percent long-term loan from PNC; and 18 percent developer equity from several sources. The opportunity zone structure provides significant cash flow savings that make the deal feasible, while the opportunity zone tax benefits have attracted a silent investor to contribute alongside PNC, strengthening the financial aspects of the project.

As an early investor in QOFs, PNC approaches its investments in opportunity zones with real-life experience. Initially, as we attended forums to learn more about this new program and funding resource, reactions to the program felt like the tale of two cities. Many private developers wanted to learn how the program would help to maximize their tax savings, while community developers were looking for investors to help revitalize their communities in a way that responded to neighborhood needs. With time, we are hopeful that these two groups may combine their interests into projects that PNC can support.

PNC has observed that not all proposed opportunity zone projects meet its funding standards. Some projects that we have reviewed, for example, did not satisfy the bank's requirement for QOFs to have a community development purpose, while others had projects that were early in the planning stages and not far enough along to meet the program's timeline. And while PNC maintains a varied pipeline, I'm happy to see that the proposed transactions are mostly, if not all, affordable housing. The hope is that stricter program guidance will be issued that balances the needs of the residents with the need to advance greater economic opportunity for all.

Another observation is that there is great variance in the marketing and knowledge sophistication among opportunity zone leaders. In some places, such as Erie, Pa., and across Alabama, there is a collective effort for opportunity zone leaders to market the region in a way that will attract the right blend of resources and private investors and engage in redevelopment efforts that are consistent with community plans.

In other places, there is little to no evidence that communities recognize the time-sensitive nature of the opportunity zone program and opportunities for attracting new investment for redevelopment. Perhaps the time period for the opportunity zone tax incentive should be extended. Doing so would allow for substantial, thoughtful, truly transformative neighborhood revitalization to come to life with the help of private investors who appreciate the personal satisfaction, as well as the financial return, that comes with responsible investing in low-income communities.

Disclaimer: Articles by non-OCC authors represent the authors' own views and not necessarily the views of the OCC. 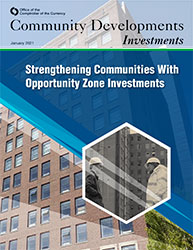 Questions or comments
Call (202) 649-6420 or email communityaffairs@occ.treas.gov. This and previous editions are available on the OCC’s website at www.occ.gov.

Disclaimer
Articles by non-OCC authors represent the authors’ own views and not necessarily the views of the OCC.