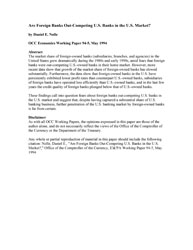 These findings call into question fears about foreign banks out-competing U.S. banks in the U.S. market and suggest that, despite having captured a substantial share of U.S. banking business, further penetration of the U.S. banking market by foreign-owned banks is far from certain.