Recovering Technologies That Account for Generalized Managerial Preferences: An Application to Banks That Are Not Risk-Neutral (WP 97-11) 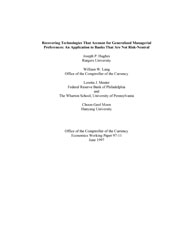 Large banks involved in recent mergers often cite scale economies as a principal motive. Yet despite this belief that bigger is more economical, most economic studies find either constant or decreasing returns to scale for large banks. What accounts for the disparity between the beliefs of bank managers and the results of these studies? This paper suggests that the answer may lie with the assumptions underlying estimations of standard cost and profit functions. Typically these estimations assume that banks are risk-neutral — that they ignore risk in their quest to maximize profits.

This paper develops an alternative model which is sufficiently general to allow for active risk management. The resulting empirical estimates indicate large economies of scale that increase with bank size.

We develop a maximization model that allows for (but does not impose) preferences of bank management that are not risk neutral. Our estimated equations are fully consistent with the theoretical model underlying the estimation procedure. The model considers a bank managerial utility function in which profit is one of many elements. Since we do not observe the probabilities that a bank assigns to various sets of outcomes, our model considers how banks rank production plans given their choices of the quantity and quality of outputs and inputs. Risk neutrality then implies that a bank's preferences will depend only on profit and that other variables in the utility function have no impact on bank preferences.

Our empirical model strongly rejects the hypothesis that banks are risk-neutral. Preferences over production plans are not invariant with respect to the tax rate on profits or on fixed revenues. Unlike previous studies, we find large increasing returns to scale even for the largest banks. This result is due to our allowance for behavior that is not risk-neutral. When the empirical restrictions implied by risk neutrality are imposed, our estimates of returns to scale are similar to those found in previous studies — small returns to scale that decline with bank size.