The Separation of Banking and Commerce in the United States: an Examination of Principal Issues (WP 99-1) 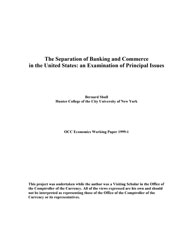 Banking law and regulation in the United States have customarily restricted the nonbanking activities of banks and the banking activities of nonbanking firms, producing a separation of banking from commerce. While such separation is surprising in a free market system that, in general, permits private firms to engage in any lawful business, it is understandable in an historical and institutional context. Proposals for change raise a wide range of economic and other issues. This paper identifies, catalogues, and elaborates these issues to provide a framework for informed judgment and further investigation. It begins with a review of early restrictions on bank activities in the United States and contrasts U.S. developments with those in several other countries in which banks have not been separated from commercial and industrial firms. It, then, reviews relevant issues arising in the financial sector, commercial sector, related to central banking and supervision, and socio-political concerns. It concludes that limited banking, as it exists in the United States, and universal banking, as it exists in other countries, have differential benefits and costs. Summary evaluation based on standard cost- benefit analysis, however, presents serious difficulties. Considerable uncertainty remains about effects in a number of areas. Many of the costs and benefits are not quantifiable, and some that are quantifiable are incomparable. A careful review of all existing evidence, identification of gaps, and further investigation is needed.