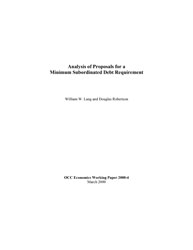 Increasing the effectiveness of market discipline in regulated financial markets has emerged as a major policy issue for banking regulators. Perhaps the most prominent proposal for increasing market discipline is the proposal to require banks to issue publicly held subordinated debt. Subordinated debt holders can discipline banks either directly by demanding higher yields for riskier institutions or indirectly by means of market signals. This paper explores the fundamental rationale behind mandatory subordinated debt proposals, and discusses the advantages and disadvantages of the most prominent proposals. To more clearly focus the analysis, the paper concentrates on proposals for requiring publicly traded subordinated debt, and therefore our analysis is relevant only to relatively large institutions that can feasibly issue such securities. The paper does not consider the various alternative proposals for issuing subordinated debt specifically designed for small institutions.