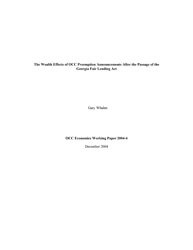 Rapid growth in subprime lending over the past decade has led to rising concerns about abusive practices by subprime lenders. By early 2004, those concerns prompted Georgia and more than 30 other states to pass laws designed to eliminate abusive or predatory lending practices by the financial services firms, including those with federal charters, operating within their boundaries. In 2003, the OCC concluded that federal law preempts the provisions of the Georgia Fair Lending Act (GFLA) that would otherwise affect national banks' real estate lending. In early 2004, the OCC adopted a final rule providing that state laws that regulate the terms of credit are preempted.

The OCC has asserted that the growing number of state anti-predatory lending laws impose substantial compliance costs on banks, especially smaller, multistate banking organizations that must spread them over smaller levels of output. If these arguments are correct, preemption should reduce expected costs, increase expected revenue, and boost expected bank profitability, especially for smaller banking firms with multistate operations. Opponents of preemption have argued that material preemption benefits for national banks imply a significant competitive disadvantage for state banks and could induce enough state bank charter conversions to endanger the dual banking system.

In this study, an event study approach is used to obtain empirical evidence on the performance effects of preemption. The sample consists of 43 national bank-dominated and 75 state bank-dominated holding companies observed over the October 2002 - January 2004 time period. Briefly, there is not strong evidence of preemption benefits when all national bank-dominated holding companies are viewed as a single group. The univariate tests of portfolio returns and cross-sectional regression results reveal that preemption benefits are larger for smaller, multistate national bank holding companies than they are for both larger national bank companies and similarly sized peers that operate in a single state. This finding is consistent with the view that state anti-predatory lending laws like the GFLA impose a proportionately greater compliance burden on smaller, multistate companies unable to realize economies of scale, which is reduced by preemption. The evidence does not strongly support the notion that preemption places state banking companies at a significant competitive disadvantage. In fact, the excess returns of smaller state banking companies, which comprise the bulk of the state bank holding company sample, tend to be positive rather than negative and typically do not differ significantly from national bank companies with similar characteristics.