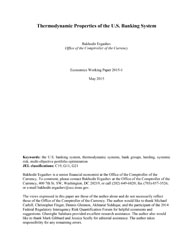 We model the U.S. banking system as a thermodynamic system of interacting elements with individual banking firms representing those elements. Firms with similar asset and liability structures interact in the sense that they pursue similar objectives. These objectives include specialization in lending, processing, investing, etc. In this model of a thermodynamic system, each firm can pursue multiple objectives at the same time. The energy of a firm relative to a given objective determines to what extent the objective is achieved: the lower the energy, the closer the firm is to the objective. A firm's total energy is determined as a weighted sum of its energies relative to individual objectives it is pursuing. As with any thermodynamic system, each firm's overall objective is to reduce its total energy. The preliminary results of calibrating the model to the balance sheet structure of U.S. large banks using Uniform Bank Holding Company Performance Reports reveals that a slow buildup in herding (i.e., pursuing similar objectives) was occurring before the last crisis among some groups of banks. Significant change in the objectives is observed in the later stages of the crisis, however, especially in the direction of moving away from the objectives set before the crisis.