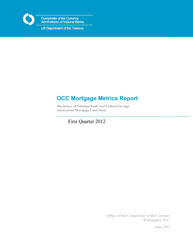 The percentage of first-lien mortgages that were current and performing at the end of the first quarter of 2012 increased to the highest levels in three years, according to a report published today by the Office of the Comptroller of the Currency.

The OCC Mortgage Metrics Report for the First Quarter of 2012 showed percentages of mortgages that were 30 to 59 and 60 to 89 days delinquent also decreased to their lowest levels since the OCC began publishing its report on mortgage performance in first quarter of 2008. The improvement in mortgage performance can be attributed to several factors, including strengthening economic conditions during the quarter, seasonal effects, servicing transfers, and the ongoing effects of home retention programs as well as home forfeiture actions.