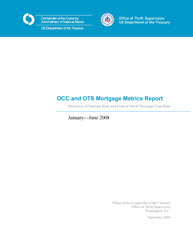 The Office of the Comptroller of the Currency and the Office of Thrift Supervision joined forces to issue a joint report today on the performance of approximately 60 percent of all first lien mortgages outstanding in the United States.

The OCC and OTS Mortgage Metrics Report found that actions by national banks and thrifts to prevent home mortgage foreclosures increased faster than their new foreclosures during the second quarter of 2008, despite an overall decline in mortgage credit quality and an increase in foreclosures.

The combined report, which replaces separate reports by the two agencies, provides loan-by-loan data in a standardized format for 34.7 million first-lien mortgages—worth more than $6.1 trillion—held or serviced by national banks and thrifts.

"As banks continue to work through this portion of the credit cycle, we are watching closely to ensure they have safe and sound risk management strategies in place," said Comptroller of the Currency John C. Dugan. "Producing this report jointly with the OTS helps to provide a more transparent and systemic view of mortgage performance within federally regulated banks and thrifts to examiners and the public."

OTS Director John Reich pointed to the increase in foreclosure prevention actions as a positive development.

"This joint report provides valuable insights never previously available. It shows that the trend is definitely moving in the right direction to minimize the number of avoidable foreclosures and keep more Americans in their homes," Reich said. "As we move through this downturn in the housing market, I encourage our institutions to continue these efforts."

From January to June 2008, new loan modifications increased by more than 80 percent, while new payment plans grew by 8 percent, according to the report. The two types of loss mitigation actions reached more than 90,000 in June alone.

During the same period, the number of new foreclosures ranged from a low of nearly 92,000 in March to a high of more than 99,000 in May, before declining to about 96,000 in June, the report showed.

Other key findings include:

The report is the first joint report from the OCC and OTS to present combined mortgage data of national banks and federal thrifts using standardized definitions and data elements to provide consistent, comparable information about the quality of first lien mortgage loans and trends in foreclosures and loan modifications. Planned for quarterly release, it represents an additional tool to help examiners assess emerging trends, identify anomalies, compare institutions to the rest of the industry, evaluate asset quality and loan-loss reserve needs, and evaluate the effectiveness of loss mitigation actions.

Despite its broad industry coverage, the data in the report should not be used to draw conclusions about overall conditions in mortgage lending.