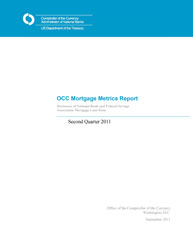 The performance of first-lien mortgages serviced by large national banks and federal savings associations declined slightly during the second quarter of 2011, according to a report released today by the Office of the Comptroller of the Currency (OCC).

The quarterly OCC Mortgage Metrics Report showed that 88 percent of the 32.7 million loans in the portfolio were current and performing at the end of the second quarter, down from 88.6 percent at the end of the first quarter, but up from 87.3 percent a year earlier. The decline in portfolio quality is mainly attributable to an increase in early stage delinquencies—mortgages 30-to-59 days delinquent—which increased 0.4 percent from the previous quarter to represent 3 percent of the servicing portfolio. The increase in early stage delinquencies reflects seasonal effects as well as a sluggish economy and elevated unemployment. The percentage of mortgages that were seriously delinquent, as well as mortgages that were 60 or more days delinquent and delinquent mortgages to bankrupt borrowers, increased slightly to 4.9 percent of the portfolio from 4.8 percent in the first quarter of 2011, after decreasing during each of the previous five quarters. While early stage delinquencies and serious delinquencies both increased from the previous quarter, they decreased from a year earlier.

The report covers about 63 percent of all first-lien mortgages in the United States, worth $5.7 trillion in outstanding balances.