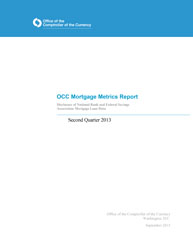 The performance of first-lien mortgages serviced by large national and federal savings banks continued to improve in the second quarter of 2013, according to a report released today by the Office of the Comptroller of the Currency (OCC).

After falling materially at the end of 2012, the number of newly initiated foreclosures continued to decline to its lowest levels since early 2008. During the second quarter of 2013, servicers initiated 150,592 new foreclosures, a 50.8 percent decrease from a year ago. Compared to a year ago, the number of completed foreclosures fell 22.2 percent to 79,960. Factors contributing to the reduction in foreclosure activity include improved economic conditions, aggressive foreclosure prevention assistance, regulatory actions, and transfer of loans to servicers outside of the federal banking system.

The mortgages in this portfolio comprise 52 percent of all mortgages outstanding in the United States—26.5 million loans totaling $4.5 trillion in principal balances. This report provides information on their performance through June 30, 2013.