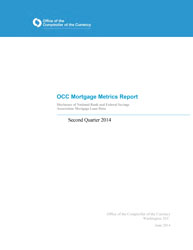 The performance of first-lien mortgages serviced by large national and federal savings banks experienced seasonal decline during the second quarter of 2014, but improved from a year earlier, according to a report released today by the Office of the Comptroller of the Currency (OCC).

The OCC Mortgage Metrics Report, Second Quarter 2014, showed 92.9 percent of mortgages were current and performing at the end of the quarter, compared with 93.1 percent at the end of the previous quarter and 90.6 percent a year earlier. The percentage of mortgages that were 30 to 59 days past due decreased 17.3 percent from a year earlier to 2.4 percent of the portfolio. Seriously delinquent mortgages—60 or more days past due or held by bankrupt borrowers whose payments are 30 days or more past due—decreased 17.0 percent from a year earlier.

Servicers implemented 208,150 home retention actions during the quarter—including modifications, trial-period plans, and shorter-term payment plans—compared with 64,790 home forfeiture actions during the quarter, which include completed foreclosures, short sales, and deed-in-lieu-of-foreclosure actions. The number of home retention actions implemented by servicers decreased by 12.5 percent from the previous quarter and 34.1 percent from a year earlier. More than 91 percent of modifications in the second quarter of 2014, reduced monthly principal and interest payments; 56.1 percent of modifications reduced payments by 20 percent or more. Modifications reduced payments by $252 per month on average, while modifications made under the Home Affordable Modification Program reduced monthly payments by an average of $269.

The mortgages in this portfolio comprise about 47 percent of all mortgages outstanding in the United States—24.1 million loans totaling $4.1 trillion in principal balances. This report provides information on their performance through June 30, 2014.