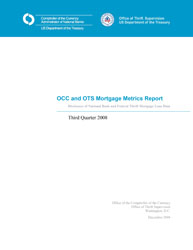 The Office of the Comptroller of the Currency and the Office of Thrift Supervision issued their second report on mortgage performance today showing continued increases in delinquencies and foreclosures in process.

While delinquencies, foreclosures in process, and other actions leading to home forfeiture continued to rise, newly initiated foreclosures dropped by 2.6 percent from the second to the third quarter of 2008.

Loan modifications continued to grow more quickly than other loss mitigation strategies, as banks and thrifts worked with borrowers to keep them in their homes while minimizing losses. The number of new loan modifications increased 16 percent in the third quarter to more than 133,000.

"One very troubling point is that, whether measured using 30-day or 60-day delinquencies, re-default rates increased each month and showed no signs of leveling off after six months and even eight months," said Comptroller of the Currency John C. Dugan. "This trend of increasing delinquencies underscores the need to understand why these modifications have not been more sustainable."

OTS Director John Reich credited financial institutions for their continued cooperation and the depth of the data they provided.

"This report once again provides valuable insights into foreclosure prevention efforts in this country," Reich said. "We hope future reports will continue to yield information on how best to modify troubled mortgages to preserve homeownership over the long term."

Other key findings include:

The report provides loan-by-loan data in a standardized format for 35 million first-lien mortgages—worth more than $6.1 trillion—held or serviced by national banks and thrifts. Despite its broad industry coverage, the data in the report should not be used to draw conclusions about overall conditions in mortgage lending.