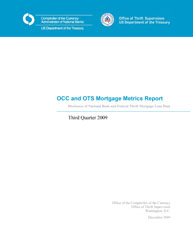 National bank and thrift servicers implemented more than 680,000 home loan modifications and payment plans in the third quarter of 2009 to avoid preventable foreclosures, according to a report released today by the Office of the Comptroller of the Currency and the Office of Thrift Supervision.

The OCC and OTS Mortgage Metrics Report for the Third Quarter 2009 showed that the number represented a nearly 69 percent increase in home retention actions from the previous quarter.

Despite progress in this area, the percentage of current and performing mortgages dropped for the sixth consecutive quarter to 87 percent of the servicing portfolio, serious delinquencies rose to 6.2 percent, and foreclosures in process surpassed 1 million mortgages, or about 3.2 percent of the servicing portfolio. Of particular note was the deterioration among prime mortgages, the largest category of mortgages. Serious delinquencies at the end of the third quarter increased to 3.6 percent of prime mortgages, up almost 20 percent from the previous quarter and more than double a year ago.

Although the volume of home retention actions increased in the third quarter and the most recent vintage of loan modifications had lower early re-default rates than older vintages, modified loans continued to re-default at high rates overall. More than half of all modified loans re-defaulted within six months of modification, with re-default defined as 60 or more days delinquent or in foreclosure.

More than 80 percent of the loan modifications in the third quarter reduced monthly principal and interest payments.