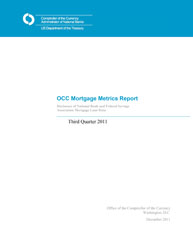 The performance of first-lien mortgages serviced by large national banks and federal savings association was stable, but delinquencies remained elevated during the third quarter of 2011, according to a report released today by the Office of the Comptroller of the Currency (OCC).

The quarterly OCC Mortgage Metrics Report showed delinquencies remained elevated but stable during the third quarter of 2011 but have declined from a year earlier. However, the number of new foreclosures increased by 21.1 percent during the quarter as servicers lifted voluntary moratoria implemented in late 2010 and exhausted alternatives to foreclosure for the large inventory of seriously delinquent mortgages working through the loss mitigation process. The increase in new foreclosures and the increase in average time required to complete foreclosures sales has resulted in the number of foreclosures in process increasing to 4.1 percent of the overall portfolio, or 1,327,077 loans, at the end of the third quarter of 2011.

The report covers about 62 percent of all first-lien mortgages in the United States, worth $5.6 trillion in outstanding balances.