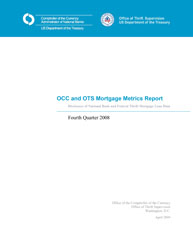 The Office of the Comptroller of the Currency and the Office of Thrift Supervision today jointly released their quarterly report on first lien mortgage performance for the fourth quarter of 2008. The report covers mortgages serviced by nine large banks and four thrifts, constituting approximately two-thirds of all outstanding mortgages in the United States.

The report showed that credit quality continued to decline in the fourth quarter of 2008. At the end of the year, just under 90 percent of mortgages were performing, compared with 93 percent at the end of September 2008. This decline in credit quality was evident in all loan risk categories, with subprime mortgages showing the highest level of serious delinquencies. However, the biggest percentage jump was in prime mortgages, the lowest loan risk category and one that accounts for nearly two-thirds of all mortgages serviced by the reporting institutions. At the end of the fourth quarter, 2.4 percent of prime mortgages were seriously delinquent, more than double the 1.1 percent recorded at the end of March 2008.

The reasons for high re-default rates are not clear. As noted in the previous quarter's report, high re-defaults could be the result of a worsening economy, excessive borrower leverage, or poor initial underwriting.

Servicers cited several reasons for mortgage modifications that did not result in reduced payments. For example, a servicer could freeze an adjustable rate mortgage's interest rate when the borrower faced the risk of imminent default, rather than allowing it to reset to the higher rate stated in the loan contract. Some modifications resulted in higher monthly payments because missed principal and interest payments were capitalized and added to the loan, which in more benign economic times could result in more sustainable modifications. Servicers also said their flexibility to reduce payments was in many cases constrained by servicing agreements with government-sponsored entities and other private investors that defined the type and the amount of modification permitted. Recent changes in some government agency and private label servicing standards should afford servicers substantially more flexibility in this regard.

Re-default rates were consistently lower for modifications that resulted in lower monthly payments. When modifications decreased monthly payments by more than 10 percent, only about 23 percent of the loans became seriously delinquent six months later. By contrast, some 51 percent of the loans in which payments remained unchanged were seriously delinquent after six months. The comparable number for loan modifications in which payments increased was 46 percent.

"This new data shows that, in the current stressful environment, modification strategies that result in unchanged or increased mortgage payments run the risk of unacceptably high re-default rates. They should only be used on a case-by-case basis where borrowers and servicers can have confidence that the modification is likely to be sustainable," said Comptroller of the Currency John C. Dugan. "The data also showed that modifications that reduced monthly payments significantly had much lower re-default rates. That result is fully in line with the approach taken in the Administration's 'Making Home Affordable' program, which is based on lowering monthly payments as the means to achieve sustainable modifications."

OTS Acting Director John E. Bowman noted that the types of loan modifications proving to be the most sustainable increased significantly from the third quarter to the fourth quarter. These modifications, which reduced homeowners' monthly payments the most and resulted in fewer re-defaults, rose to more than 37 percent of all modifications, from 26 percent in the previous quarter.

"The trend toward lowering payments to make home mortgages more affordable is moving in the right direction," Bowman said. "The continuing decline in credit quality underscores the need for mortgage servicers to increase their efforts to modify home mortgages. Sustainable and affordable mortgages is a goal we all share for keeping more Americans in their homes."

Based on the results of the report, the OCC and OTS directed each of the banks and thrifts that provide data for the Mortgage Metrics report to assess their 2008 loan modifications, especially those that increased monthly payments or left them unchanged, to ensure that criteria applied to those loans, and to loans modified in the future, result in modifications that are affordable and sustainable.