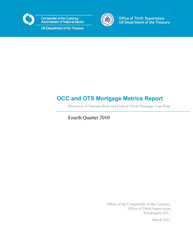 The credit quality of first-lien mortgages serviced by large national banks and thrifts improved slightly during the fourth quarter of 2010, according to a report released today.

The quarterly report by the Office of the Comptroller of the Currency and the Office of Thrift Supervision showed that 87.6 percent of the 32.9 million loans in the portfolio were current and performing at the end of the fourth quarter of 2010. While mortgage delinquency levels remained elevated, the overall quality of the portfolio of mortgages included in this report improved from the previous quarter. The percentage of mortgages that were seriously delinquent declined for the fourth consecutive quarter to the lowest level since the second quarter of 2009.

The report covers about 63 percent of all first-lien mortgages in the country, worth $5.7 trillion in outstanding balances.