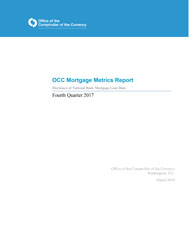 Performance of first-lien mortgages remained largely unchanged during the fourth quarter of 2017 compared with a year earlier, according to the Office of the Comptroller of the Currency's (OCC) quarterly report on mortgages.

The OCC Mortgage Metrics Report, Fourth Quarter 2017, showed 94.5 percent of mortgages included in the report were current and performing at the end of the quarter, compared to 94.7 percent a year earlier.

The report also showed that foreclosure activity has increased from the previous quarter. Reporting servicers initiated 34,519 new foreclosures during the fourth quarter of 2017, a 0.7 percent increase from the previous quarter and a 24.1 percent decrease from a year earlier. Servicers implemented 21,866 mortgage modifications in the fourth quarter of 2017. Seventy-nine percent of the modifications reduced borrowers' monthly payments.

The first-lien mortgages included in the OCC's quarterly report comprise 33 percent of all residential mortgages outstanding in the United States or approximately 18.1 million loans totaling $3.32 trillion in principal balances. This report provides information on mortgage performance through December 31, 2017.