Minority depository institutions (MDI) play a vital role in the communities they serve by providing access to investment capital, financial products, and services that may not otherwise be available. As community-focused banks, MDIs have a unique understanding of their local markets and needs. MDIs leverage this knowledge to support small businesses, faith-based organizations, community facilities, real estate developments, and community members.

Historically, the first MDIs grew out of the pre-civil rights era providing banking services in underserved areas; later ones were founded to serve immigrant communities. Today, MDIs continue to play significant roles in minority communities in urban and rural areas throughout the United States.

Founded in 1996, the National Community Investment Fund (NCIF) is a nonprofit private equity trust and impact investor dedicated to increasing the flow of responsibly priced financial products and services in low- and moderate income (LMI) communities. The NCIF achieves its mission through three complementary lines of business: investing in mission-oriented financial institutions, most of which are MDIs or certified community development financial institutions (CDFI); using new markets tax credits (NMTC) to invest in high-impact development projects that benefit these communities, in partnership with the mission-oriented institutions; and using research to showcase impact.

The NCIF has invested tier 1 and tier 2 capital directly into MDIs to support the financial services they provide to LMI and minority communities. In all, the NCIF has invested in 58 mission-oriented financial institutions of which 23 were MDIs (current investments are in 14 MDIs). Together with other NCIF investments, these mission-oriented institutions have generated over $7 billion in loans in LMI communities.

To encourage high-impact projects, the NCIF provides metrics and information that banks can use to analyze potential partnerships, projects, and investments that may qualify them for Community Reinvestment Act (CRA) consideration. The NCIF considers impact as the foundation for all its investing and lending activities. The NCIF measures and demonstrates the social impact of its investments in communities with its unique and proprietary Social Performance Metrics. The NCIF developed its Social Performance Metrics to identify high-impact MDIs and other mission-oriented financial institutions as potential partners for banks with similar missions and goals. The metrics provide a suite of quantitative and qualitative data, including "mission intensity" data (see figure 1). Some of these metrics are available from the NCIF's search engines, www.BankImpact.org and BankImpact Maps (www.bankimpactmaps.org).

The NCIF develops these metrics using the self-reported data received from banks and from publicly available sources, such as federal Home Mortgage Disclosure Act (HMDA) data. The NCIF analyzes this data to quantify and compare the social impacts of banks by the percentage of HMDA-reported lending and the number of branches in LMI areas and highly distressed U.S. Census tracts. The NCIF then assigns the banks to quadrants to help investors and consumers make informed banking choices (see figure 2). Banks exceeding the NCIF's "impact thresholds" are assigned to the upper-right quadrant and highlighted for potential partnerships. (For detailed information on the NCIF's quadrant rankings, visit www.ncif.org.)

The social performance metrics of MDI banks clearly show the banks' importance in their communities. As a peer group, MDI banks have a substantial presence in LMI communities, regarding both branch locations and lending. The median MDI bank has 57 percent of its branches in LMI areas, compared with 40 percent for the median bank in the United States. In addition, based on HMDA reporting, MDI banks are much more likely to lend in LMI areas, with 48 percent of MDI lending going to these communities, compared with just 26 percent for the median bank overall.

In deploying NMTCs, the NCIF uses its own 3-Way Partnership Model to create relationships between mission-oriented MDIs and larger banks interested in impactful projects in LMI communities. The 3-Way Partnership comprises the following parties (see figure 3 for more detail on the structure):

Liberty Bank and Trust, a New Orleans-based MDI, along with the NCIF and U.S. Bank contributed to the NMTC financing for the Gateway Marketplace in Detroit.

This new 350,000-square-foot retail center is the first major retail project in Detroit in over 40 years. The project remediates a 36-acre blighted and contaminated brownfield site and brings a fresh grocer to a federally designated food desert. Hundreds of new construction jobs and permanent jobs were created as a result of the development.

The Harbor Bank of Maryland, City First Bank of DC, the NCIF, and U.S. Bank contributed to the $33 million in NMTC financing for the development of the 1812 Ashland project. The project, developed by the Forest City–New East Baltimore Partnership, includes lab and office space for local and national tenants that have research relationships with Johns Hopkins University (JHU), as well as additional companies attracted to Baltimore's emerging technology sector. The project created hundreds of construction and permanent jobs and generates significant economic activity in the local community.

This project is a key component of a larger, $1.8 billion initiative to revitalize the highly distressed community of East Baltimore, an area that has suffered from persistent poverty and high unemployment. East Baltimore Development Inc. (EBDI), a nonprofit organization established by community, government, institutional, and philanthropic partners to revitalize, re-energize, and rebuild East Baltimore, oversees the initiative. The Harbor Bank of Maryland has a long-term presence in the community and often acts as a catalyst for economic development in Baltimore. Joseph Haskins Jr., Chairman and CEO of the Harbor Bank of Maryland, who was instrumental in the formation of EBDI, believes that such partnerships have allowed local and national entities to leverage their strengths and maximize the impact of their investments in the community.

Articles by non-OCC authors represent the authors' own views and not necessarily the views of the OCC. 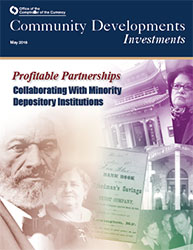