Residents and businesses in rural, remote Alaskan communities are enjoying long-awaited, reliable internet access, thanks in part to leadership and financing provided by two national banks. U.S. Bank and First National Bank Alaska serve as examples to other banks interested in helping to reduce the digital divide in the rural communities they serve.

U.S. Bank and First National Bank Alaska helped finance, with support from different federal programs, two separate broadband projects in communities that are home to Native Alaskans. In doing so, the banks have helped to change lives in Alaska, according to Jay Page, First National Bank's vice president and corporate loan officer.

The impact delivered by the investments of these two banks highlights the need for bank financing of broadband development projects in America's distressed and underserved nonmetropolitan middle-income geographies and low- and moderate-income rural areas.

In 2013, U.S. Bank used its public welfare investment authority to help deliver reliable internet access over a broadband network for the first time to remote Iñupiat villages in northwestern Alaska, within the Arctic Circle, that are reachable only by airplane, snowmobile, all-terrain vehicle, or dog sled.

The business development team at U.S. Bank had this to say about the project: "This phase of the TERRA (Terrestrial for Every Region of Rural Alaska) project in northwestern Alaska was intended to meet the technology demands of schools and health clinics in these communities, so rural communities could better connect to a wide-range of resources and also address community concerns around social isolation and depression. In our conversations with key partners, it was clearly important to equip health care organizations with broadband access so they could effectively provide medical care, and take advantage of new technology such as access to electronic medical records and performing specialized consultations by video-conference."

The native Iñupiat communities of Noatak, Buckland, Noorvik, Selawik, and Igichuk Hills are the latest group of communities connected through the TERRA network, which already serves 44,131 people in 84 communities in northwestern Alaska.

Constructing a broadband internet network is costly in Alaska, where populations are low and geographically remote. In the TERRA network, each phase has had a financial gap between estimated infrastructure costs and expected return on investment due to limited population, challenging terrain, and the need to minimize subscription costs for low-income communities. The NMTC program provided the capital infusion that allowed a business like GCI Communications to meet its minimum return on investment requirements and to bring its services to the local communities.

The TERRA network crosses 233 rivers, 87 lakes, and six mountain ranges in northwestern Alaska. The network runs in a 3,289-mile-long ring. If stretched end to end, the network would extend from Seattle to Miami. This phase of the network's development marked an important milestone: It closes the network loop.
"In a telecom network, ringing a network is hugely important, because if there's failure or a technical problem and no ring, any data beyond that failure can't get through," Mr. Schnaper said. "Once you have a ring, data can go in either direction."

First National Bank, Alaskan-owned and operated since 1922, is committed to serve the special needs of Native Alaskans with support from federal loan guarantee programs designed to benefit Native communities. Thanks to First National Bank's support, Kodiak Island, once served only by bouncing signals off satellites, now has subsea fiber cable service that is relayed to surrounding villages.

Kodiak Island sits about 30 miles off the southern coast of Alaska and about 250 miles southwest of Anchorage. It is home to Alaska's largest fishing port. Before First National Bank's investment in Kodiak–Kenai Cable, anyone needing to see medical specialists had to travel to Anchorage. Phone calls made by doctors, residents, and businesses were often interrupted and delayed as communication signals bounced off satellites.

"The early satellite network had a 10-second delay; the delay was annoying but also could be crippling in an emergency situation," said Carl Marrs, chief executive of Old Harbor Native Corporation (Old Harbor), owner of Kodiak–Kenai Cable. Marrs oversaw the construction of the subsea project from its start, in the early 2000s, to its end in 2006 when the last undersea cable was laid.

Old Harbor believed that the project would enhance economic opportunities, educational opportunities, and health services for all communities served by the network. The unconventional project involved building hundreds of miles of a submerged fiber-optic cable. Old Harbor reached out to First National Bank and investors, including two Native tribes and the owners of a private missile launching complex to help finance the project. The undersea cable reached Kodiak Island, not the remote villages further inland. To serve these communities, First National Bank helped to finance the construction of microwave towers for wireless broadcast, at a cost of $16 million.

To mitigate its risk, First National Bank obtained a federal loan guarantee from the U.S. Office of Indian Energy and Economic Development (IEED), part of the U.S. Department of the Interior. The bank is Alaska's leading IEED lender. In 2000, First National Bank became the first bank to receive a Title VI loan guarantee, a program overseen by the Office of Native American Programs, part of the U.S. Department of Housing and Urban Development (HUD). HUD's Indian Housing Block Grant Program helps finance affordable housing and infrastructure activities on Indian reservations and areas.

Now, residents can connect online with doctors 287 miles away in Anchorage without leaving home. Doctors in Anchorage and elsewhere can assist doctors in Kodiak with diagnoses, treatments, and emergency surgery when patients cannot be moved to mainland hospitals because of health, cost, weather, or other issues. 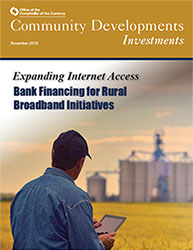