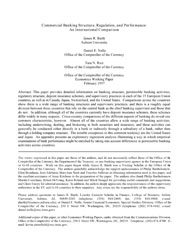 This paper provides detailed information on banking structure, permissible banking activities, regulatory structure, deposit insurance schemes, and supervisory practices in each of the 15 European Union countries, as well as in Canada, Japan, Switzerland, and the United States. Comparisons across the countries show there is a wide range of banking structures and supervisory practices, and there is a roughly equal division between those countries that rely on the central bank as the chief banking supervisor and those that do not. In addition, although all of the countries currently have deposit insurance schemes, these schemes differ widely in many respects. Cross-country comparisons of the different aspects of banking do reveal one common characteristic, however. Almost all of the countries allow a wide range of banking activities, including underwriting, dealing, and brokering in both securities and insurance, and these activities can generally be conducted either directly in a bank or indirectly through a subsidiary of a bank, rather than through a holding company structure. The notable exceptions to this common tendency are the United States and Japan. An appendix presents an exploratory regression analysis illustrating a way in which empirical examinations of bank performance might be enriched by taking into account differences in permissible banking activities across countries.