The former agency leaders joined Comptroller Otting for lunch to discuss the future of the agency and the federal banking system. 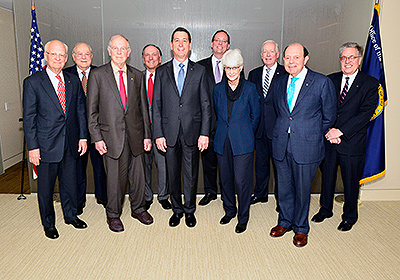 Comptroller Otting issued the following statement after the conclusion of the lunch:

The gathering of distinguished bipartisan leaders on January 31, 2018, reflects the progress of the modern banking industry, the value of the agency’s independence, and the richness of its heritage.

I was proud to host former Comptrollers of the Currency and former Acting Comptrollers, as the OCC begins its 156th year of ensuring our nation has a stable, functioning banking system that supports its economy and serves consumers, businesses, and communities across the country.

Created as a bureau of the U.S. Department of the Treasury by the National Currency Act of February 25, 1863, the Office of the Comptroller of the Currency marks its 155th anniversary in 2018.